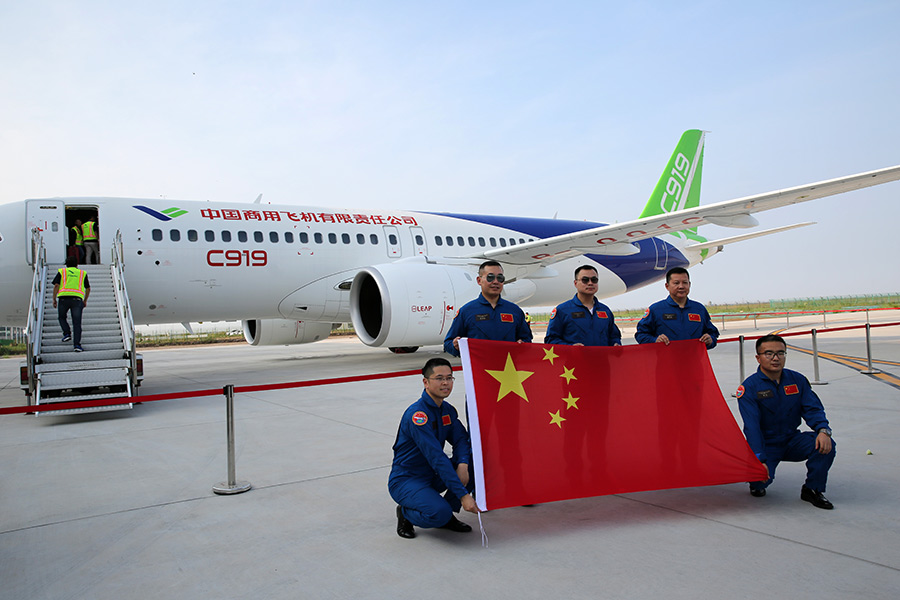 Crew members pose for a photo after a C919 plane's successful completion of a test flight from Shanghai to Dongying, Shandong province, on July 12. [Photo by Zhou Guangxue/China News Service]

The C919, China's first domestically developed large passenger jet, is to undergo a series of tests before it hits the market by 2021.

On May 11, the first C919 prototype underwent its first limit load test, which is also the first structural strength verification that is followed by the European Aviation Safety Agency, according to its manufacturer, Commercial Aircraft Corp of China Ltd, also known as COMAC.

Some problems occurred when the load was increased to 137 percent of the limit. The design and engineering teams discussed possible solutions and completed the troubleshooting process. Later, the outline for the final test was approved by the Civil Aviation Administration of China and its European counterpart.

On June 6, the first C919 prototype successfully completed its limit load test, and began preparations for a series of aircraft structure limit load tests, according to COMAC.

"Strength tests also examine the pressure, pulling force and torsion force that the aircraft structure can bear. We have been pursuing the balance between weight and safety," he said.

From conducting its debut flight to obtaining airworthiness certification, an aircraft model needs to undergo more than 1,000 tests, including those related to high temperatures, high humidity, extreme cold, strong crosswinds, its minimum lift-off speed and stalling, according to COMAC.

So far, 815 orders have been placed for the C919 from home and abroad.

The ARJ21, China's first home-built regional passenger jetliner, completed more than 300 ground tests and 5,258 hours of test flights before it gained the model qualification certificate, according to figures provided by COMAC.

The model conducted test flights in various plateau areas in China, as well as Changsha in Hunan province, Sanya in Hainan province, and in North America. It has been in commercial use for more than two years. With 78 to 90 seats, the aircraft has a flying range of 2,225 to 3,700 kilometers.