As California projected a record almond harvest for the 2018 season, growers are concerned that the state's largest agricultural export could be hurt by the trade war ignited by Washington. 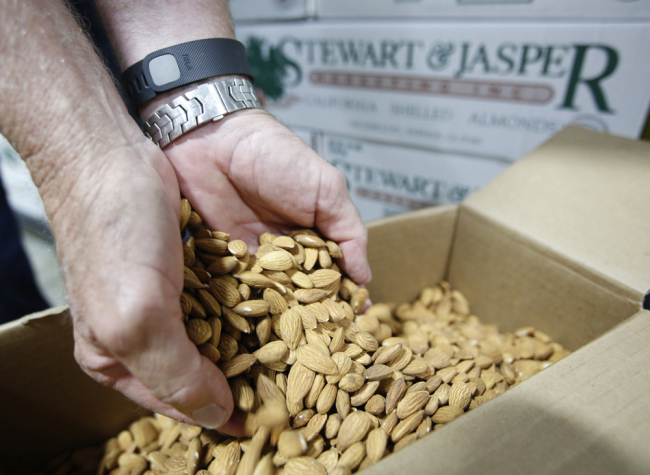 In this Tuesday, July 21, 2015 photo, Jim Jasper, owner of Stewart Jasper Orchards, displays a box of almonds that are ready for shipping at his processing plant in Newman, Calif. [File photo: AP/Rich Pedroncelli]

The 2018 California Almond Objective Measurement Report from the U.S. Department of Agriculture (USDA) forecast this year could set a record crop at 2.45 billion pounds (1.11 billion kg), up 7.9 percent from 2017, local newspaper The Sacramento Bee reported Friday.

Holly King, chair of the Almond Board of California, said "the nuts are setting and we have a very marketable crop." Meanwhile he worried the crop would be hurt by the trade war.

Trade tensions between the world's top two economies had escalated since Friday, when the United States began imposing a 25-percent additional tariff on Chinese products worth 34 billion U.S. dollars.

China retaliated as its customs authority announced that additional tariffs for some imports from the United States worth the same amount, including agricultural products, vehicles and aquatic products, also took effect on the same day.

"As we head into harvest, obviously these tariffs create a fair amount of uncertainty," King said. "The uncertainty that is hanging over the market makes it difficult to make commitments to contracts."

California dominates global almond market, but since the trade war could levy a 50 percent tariff on imported almonds, the Golden State's products would be harder to compete with Australian almonds in the Chinese market, the second largest exporter of the commodity who has a free trade agreement with China.

"We as growers are very concerned," said King, as the crop generates 104,000 jobs for California and injects 11 billion dollars into the state economy.