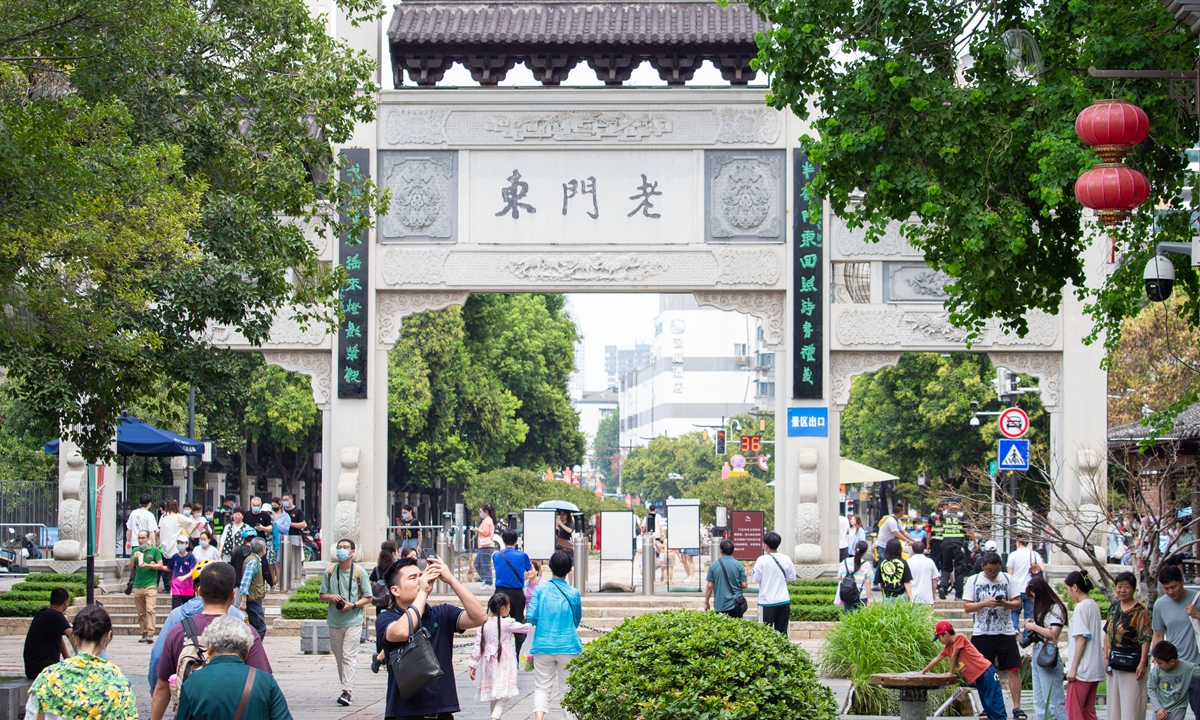 The night economy, camping and short-distance driving are the new trends of this year's four-day Mid-Autumn Festival holidays, which come to an end on Tuesday. Meanwhile, hotel and homestay bookings for the National Day holidays in October have surged, statistics from travel agencies and online platforms showed.

As the Mid-Autumn Festival is for family gatherings, which was also affected by sporadic COVID-19 cases in the country, more people chose to explore their own cities of residence.

Bookings for visiting local scenic spots rose by more than 2.3 times in the past week, according to Feizhu, Alibaba Group's online travel booking platform.

Local and peripheral travel reservations account for more than 60 percent of all bookings. Among them, clocking-in to scenic spots is a must, and ticket orders from local and surrounding areas account for 80 percent of the total, data from online travel platform Ctrip showed.

Camping has also become a trend during the past holiday. Camping reservations increased by 60 percent compared with the Dragon Boat Festival in June, according to Ctrip.

In the past week, bookings for camping products on Feizhu have increased more than seven times compared with the previous week.

Feizhu data also showed that bookings for night travel products saw a monthly increase of 146 percent during the holiday. Night tours on rivers and lakes, theme park night tours and city night sightseeing are the most popular items on the platform, said Tongcheng Travel.

Hotels that enable customers to gaze at the moon and enjoy starry nights, hot springs, lake views and camping were most popular among the bookings. The average search popularity increased more than three times from the previous week, according to data from travel platform Qunar sent to the Global Times.

It is worth noting that prefabricated food also saw a jump in sales. Meanwhile, restaurant bookings were hot nationwide, with VIP rooms at some restaurants in Beijing booked out in June.

As the number of self-driving tours and short-distance tours increased, the number of inter-city and inter-provincial trips dropped. According to the Ministry of Transport, a total of 66.957 million passenger-trips were made nationwide during the holiday, down some 37 percent from the same period in 2021.

The Mid-Autumn Festival holidays are expected to become an important node for the recovery of the tourism market, and a travel peak is expected during the impending National Day holiday, a travel agent surnamed Cai told the Global Times on Monday.

Cai disclosed that travel agencies and online travel platforms are busy preparing for the Golden Week holiday in October now.

Over the past two weeks, bookings for travel to Macao during the National Day holidays have increased more than 300 percent month-on-month, according to Ctrip.

Chen Jia, an independent research fellow on international travel, told the Global Times that, if the COVID-19 cases can be quickly cleared before the National Day holiday, the consumption potential, which has been suppressed by the pandemic this year, will likely see a boom during the October Golden Week.