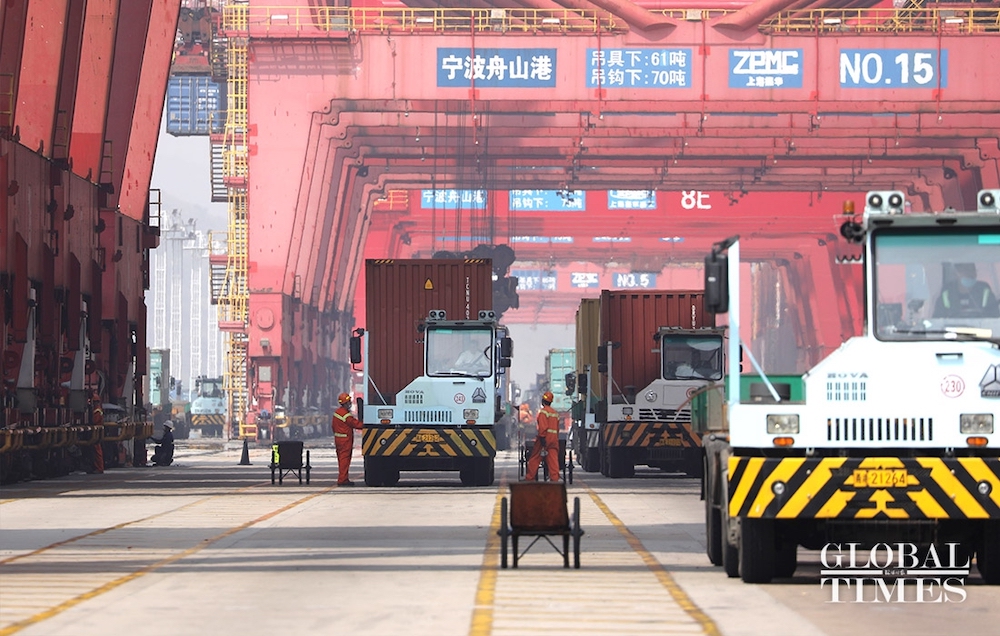 After Wuhan, capital city of Central China's Hubei Province hit hardest by the COVID-19 pandemic in the country, lifted its city lockdown after 76 days in isolation to contain the novel coronavirus spread, China officially entered the next stage of combating the virus.

How can growing risks from imported infections and a possible rebound in domestic cases be prevented? How can production and social activity be gradually restored while the risk of a second outbreak is controlled? How can the world's factory regain its momentum amid shrinking external demand due to the virus spread, considered as the largest 'black swan' event of the year and worst crisis since World War II? This is the last part of a three-part series featuring the new challenges China faces in the aftermath of the COVID-19 pandemic.

Global Times reporters visited the Chuanshan port area of the Ningbo Zhoushan Port in East China's Zhejiang Province late last week, following in Chinese President Xi Jinping's footsteps. The port has been keeping a regular routine despite the COVID-19 pandemic, reflecting the inherent trade vitality that sets the stage for the nation's resilience in the second half, per Global Times' interviews with port management, local officials and market watchers.

One question has haunted Chinese market watchers ahead of the forthcoming announcement of a slew of official data gauging the economy in the first quarter: How bad have China's exports been hit by the COVID-19 pandemic?

But things appeared normal at the Chuanshan port area of the Ningbo Zhoushan Port in East China's Zhejiang Province, the world's third-largest container port, at least for now.

Container trucks were plying their trade across the port. Drivers were devoting themselves to the regular routine of the port area that has lately entered the limelight after a visit by Chinese President Xi Jinping late March on an inspection tour for COVID-19 control and work resumption in the Zhejiang manufacturing and export hub.

Such scenes also epitomize an inherent trade vitality despite the novel coronavirus outbreak that saw the world's largest trading nation at near standstill for much of the first quarter.

Operations at the Ningbo Zhoushan Port haven't been halted by the coronavirus outbreak. The port has been running nonstop, even on the Chinese New Year's Eve and New Year's Day, Hong Qihu, head of the business department of Ningbo Zhoushan Port Co., Ltd, told the Global Times in an exclusive interview at the port's headquarters in Ningbo.

The port has gone through ups and downs in the first quarter, with January's cargo tonnage largely unscathed by the disease as massive public health interventions were imposed late that month to fight the spread of the virus, Hong said.

The port's operations initially lacked luster before gradually rebounding due to the prolonged Spring Festival holidays and the domestic virus outbreak, according to Hong. Capacity has neared levels seen during the same period of last year since the resumption of work and production across the board starting late February.

The gradual recovery was handcuffed by the fast coronavirus spread outside of China beginning mid-March which dealt a blow to overseas demand, inevitably impacting port production and transport.

That forecast also foreshadowed a grim picture for exports in the first quarter, with analysts predicting a 12 percent export decline in March compared to the 17.2 percent fall in US dollar terms in the first two months due to the pandemic.

Official trade data was scheduled to be released on Tuesday. That also tracked a downbeat forecast for GDP growth in the first quarter, with some predicting the country's economy could contract as much as 10 percent in the quarter. GDP data will be released on Friday.

"Data definitely won't look good for the first quarter or [the next quarter] because the epidemic continues overseas. We must be prepared for that," Guan Tao, a former head of the balance of payment department at the State Administration of Foreign Exchange, told the Global Times, noting that some losses cannot be remedied and "what we need is that governments and companies join hands" to get through tough time and minimize future losses.

At a meeting on Wednesday, Xi also warned of mounting downside risk for the world economy and called for preparedness to cope with prolonged external environment changes.

As an export and manufacturing powerhouse, overseas demand has profound implications for the Chinese economy, Hong said. Vessels' transport capacity will become increasingly redundant as the pandemic hits overseas demand, he noted.

"The port is a barometer of the economy. Port operations are increasingly intertwined with the world economy," Hong said. "Changes in any points in the global economic landscape will have an impact on the port's fundamentals."

Economies across the globe, including China, have been on high alert for imported coronavirus cases, with a raft of prevention and containment measures in place, Hong said, adding that transport between different ports globally remains largely normal.

Logistics operations in their entirety have thus taken a hit, creating negative ripples throughout the port and vessel operators, he said.

The port is connected to a variety of industries. A slide in external demand would feed through the manufacturing sector in the Yangtze River Delta Economic Zone, he noted.

Whether the port can return to its pre-virus hustle and bustle is still contingent upon virus containment globally.

It still needs to be seen "if the virus can be basically contained by the end of the second quarter, suggesting business and life going back to normal, and port production will soon recover in the third quarter," Hong said.

If that happens, a rebound would be expected in the last two quarters of the year, said Xu Weiwu, deputy general manager of Ningbo Beilun Third Container Terminal Co, the largest container port of Ningbo Zhoushan Port.

"If we have the virus numbers quickly under control by the end of April, without another wave of outbreak, a recovery period is set to kick in possibly within a few months," Xu told the Global Times, pledging more support for businesses including lower logistics costs.

Lingering trade uncertainty by no means creates insurmountable roadblocks for an economy that's scored impressively in the first half of the battle against the COVID-19 pandemic and is set to come out firing in the second half, Chinese observers said.

On top of that, the port's future hinges on commitment to emerging technologies such as artificial intelligence and big data and efforts to diversify into financial services among other offerings that would build it into a comprehensive operator as powerful as Port of Singapore, Hong said.

Among efforts to up the city's ante in marine insurance, in which the Ningbo Zhoushan Port plays a leading role, are the creation of a marine insurance services base that attracts domestic and foreign financial institutions to set up offshore banks, insurers and funds in the city. That would enable the port, marine and logistics businesses to access multilayered financial and insurance services such as procurement payment, trade financing and risk guarantees, the financial affairs office of Ningbo municipal government said in a statement sent to the Global Times over the weekend.

At the national level, Ren Hongbin, a senior official at the Chinese Commerce Ministry said on Friday that the ministry was conducting reviews on resumption of work and orders at the country's more than 400,000 export companies and enacting targeted measures to help these companies maintain their market, order and market share.

Guan said that while foreign demand for Chinese products remained largely unchanged, companies must prepare for a short-term shock due to temporary falls in exports.

"The cure is that we must be creative and united," Guan said.

"We have to maintain the overseas market, but we also have to develop the domestic market. The government and companies must also do their part."

While it will take time for global trade to recover, Guan said, the world needs Chinese products "more than ever."

Guan said that both the central and local governments have issued measures including financial and other policy support for export businesses, but those measures need to improve the policy transmission mechanism so as to ensure support is actually delivered to companies in dire need of help.

However, the government cannot do everything, he said. Businesses must also enact necessary measures including saving cash and making adjustments to production.

"Everyone must tighten their belt for the tough time," he said, "but we will emerge from this."