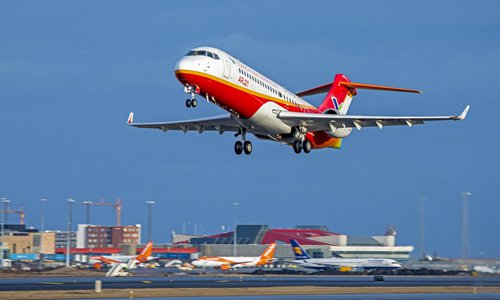 Takeover speculation of the Chinese conglomerate HNA Group by Southern China's Hainan Province government, where the indebted company is headquartered, is fueling hope that the conglomerate is poised to receive yet another blow from the coronavirus outbreak and could be resuscitated.

Investor theories saw HNA-related stocks surge on Thursday, outperforming a rally across the board on the A-share market.

The takeover, according to a Bloomberg report released Wednesday, citing unidentified sources familiar with the plans that also include selling off HNA's airline assets, has yet to be confirmed by either HNA or Hainan government officials.

The supposed deal was billed as "the most dramatic step to date by the state to contain the deepening economic damage from the deadly coronavirus outbreak."

During Chen's visit, executives with Hainan Airlines and its subsidiary passenger carrier Beijing Capital Airlines, along with other HNA-owned firms, shared their epidemic control efforts and the progress they've made on resuming operations.

The path to confirmation could not mask the situation facing the parent company of Hainan Airlines, as air passenger traffic has taken a huge hit since the emergence of the coronavirus outbreak.

Domestic airlines transported on average of 470,000 passengers daily between January 25 and February 14, representing a quarter of the reading from the same period last year. Li Jian, deputy head of the Civil Aviation Administration of China (CAAC), revealed Saturday at a press conference held by the joint prevention and control mechanism of the State Council.

In a bid to limit travel, the CACC has made four free flight cancellation policy announcements since January 21, according to Li. So far, domestic and overseas airlines had handled over 20 million flight ticket cancelations, involving more than 20 billion yuan ($2.85 billion).

The air passenger daily average is estimated to remain below 200,000 during February 15-23, one-tenth of last year's peak period, according to estimates disclosed by Li.

This represents bigger concerns for Hainan Airlines. The airline carried 6,695 flights between January 23 and February 18, indicating an average of 31 percent of its planes operating during the period, Chinese news platform jiemian.com reported on Thursday, citing the Flight Manager app.

Chen had said earlier that 2020 would be a year when the fate of the company's efforts to defuse a long-last liquidity crunch would be decided. The plight resulting from the epidemic, however, has added insult to injury for HNA, industry insiders said.

A Hainan Airlines flight attendant was asked to take unpaid leave for a month, but whether the unpaid holiday leave would be expanded has not been decided, according to the jiemian.com report, without identifying the employee. An aircraft maintenance employee with the same airline purportedly worked the first half of the month and was given the second half off without pay.

HNA-backed Hong Kong Airlines reportedly has plans to lay off about 400 people and asked its ground crew to take unpaid holidays for two weeks out of the month.

The report also said flight attendants had yet to recover hourly pay arrears for six months, and in other cases, contracts had not been renewed upon expiring.  Hainan Airlines Holding sold at least 29 planes in 2019, with the transactions totaling over 7 billion yuan.

The conglomerate's corporate bond report for the first half of 2019 offers a glimpse of the massive pressure management is facing to resuscitate the company.

HNA has implemented measures aimed at asset restructuring and debt issuance to address the liquidity crunch that has haunted the Hainan-based conglomerate. Signs have also indicated the virus onslaught might push the company toward the brink of a meltdown, which would create a sharp revival in risk appetite for its related shares amid takeover rumors.