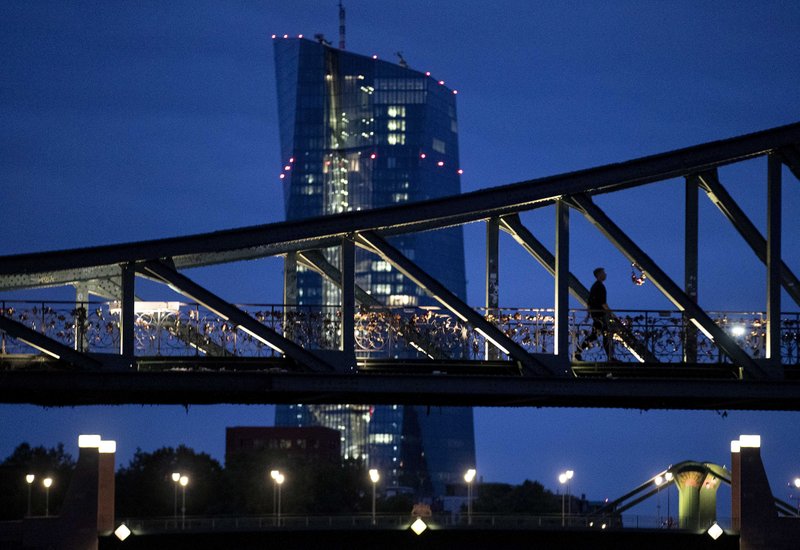 A man walks over a bridge with the European Central Bank in background in Frankfurt, Germany, Tuesday, Sept. 17, 2019. (Photo: AP)

A recession looms for Germany and the European Central Bank is pleading for governments to spend more to revitalize economic growth. Yet despite having the luxury of borrowing money for less than nothing, the German government is keeping a tight rein on its finances.

A debate over Germany’s devotion to budget austerity is intensifying as the outlook for the economy dims and public pressure grows to address big issues such as global warming. On Friday, the government will unveil a raft of measures that could include billions in incentives and spending to make the economy more environmentally-friendly.

“The call for fiscal stimulus has never been louder,” said Carsten Brzeski, chief economist for the bank ING Germany. “And this week will show whether the eurozone country with the deepest pockets finally plans to empty them.”

The slowdown in growth across Europe, blamed largely on the U.S.-China trade conflict and uncertainty about Brexit, is putting a sharp focus on Germany’s devotion to the so-called “Schwarze Null,” or “black zero,” which refers to the policy of balancing the budget — the zero — with at least a small surplus to keep it in the black.

The debate over government spending policy affects the entire 19-country eurozone, since more government outlays by Germany and other fiscally sound countries such as the Netherlands could help support growth by building new infrastructure, such as roads, rail lines or high-speed internet, or by gathering less in taxes.

The German government has so far shown little willingness to change its stance. It has ignored repeated pleas from the head of the European Central Bank, Mario Draghi, who said last week it was “high time” for government spending to take over as the main tool of economic policy. The central bank announced interest rate cuts and bond purchases in an attempt to ward off a downturn.

The government argues it’s important to reduce debt while the economy is growing and not to burden future generations. German Finance Minister Olaf Scholz submitted a balanced draft budget of 360 billion euros ($400 billion) for 2020 last week and Chancellor Angela Merkel said in a speech before the German Taxpayers’ Federation that the government was sticking to its balanced budget, “not as a goal in itself, as we are often accused of doing, but because clear economic reasons and fairness aspects argue for that.”

Merkel noted that Germany’s total debt would fall below 60% of gross domestic product — the limit for countries that use the euro — for the first time since 2002. The German constitution itself sharply limits deficits to 0.35% of GDP except in a crisis, yet the government’s surpluses go well beyond that requirement.

While the German government may not be giving up on balanced budgets, there are signs it is at least easing up the zeal with which it amasses surpluses.

Last year’s surplus of 1.9% of GDP has fallen to 1.4% this year and is expected to hit 0.9% next year — meaning that the government is already providing some fiscal stimulus. Germany’s economy shrank 0.1% in the second quarter and underlying figures are pointing to another quarter of contraction, which would put the country in a technical recession.

Marcel Fratscher, the head of the German Institute for Economic Research in Berlin, has called the balanced budget a “false fetish.” His institute has argued that Germany needs to invest in long-term modernization projects such as extending digital services in rural areas.

The president of the Federation of German Industries, Dieter Kempf, said in an interview with Der Spiegel that “it’s worth considering sensible use of the space,” allowed by the constitution to fund more investment.

The calls to spend are not coming only from those concerned about the economy, but also climate activists who say more needs to be done to shift the world economy from carbon-intensive industries and consumption. Public pressure has only grown after the country witnessed its hottest summer on record and the opposition Greens party made big gains in elections to the European Parliament and in domestic polls.

On Friday, the government is expected to unveil a package of incentives aimed at reducing carbon dioxide emissions from homes and autos so that Germany can meet its goals under the 2015 Paris climate accord. Possible measures include incentives to replace old heating systems or to purchase battery-powered autos. A report in Die Welt newspaper said the government was considering measures totaling some 40 billion euros ($44 billion) through 2023.

Brzeski said such a program “would not be enough to stop the slide of the economy toward recessionary territory, but it could be an important cornerstone in Germany’s recovery and its quest for a new economic model.”

Spending on that level would only be “a slow-motion stimulus” since it will take time to roll out, said Holger Schmieding, chief economist at Berenberg bank.

“It will add up over time and support domestic demand,” he said. “However, the German stimulus will not be a European, let alone a global, game changer.”