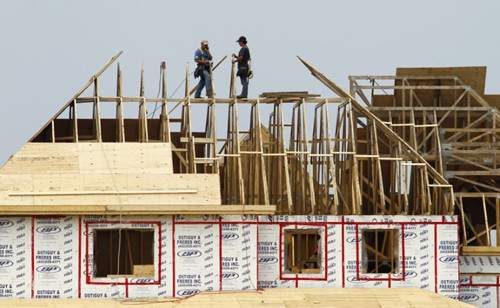 Builders work on the the roof of a new home under construction in the Montreal suburb of Brossard, August 10, 2010. (Photo: Reuters)

OTTAWA  - Canadian housing starts surged unexpectedly in November, driving a six-month trend to its highest point in almost 10 years, amid a continued condominium-building boom in Toronto, data from the Canada Mortgage and Housing Corporation showed on Friday.

The seasonally adjusted annual rate of starts rose to 252,184 in November from October's downwardly revised 222,695. Economists had expected a decline to a 215,000 annual rate.

"This largely reflects construction of multiple units in Toronto, where evidence of overbuilding is low due to the decreasing inventory of completed and unabsorbed multiple units and strong demand," said Bob Dugan, CMHC's chief economist.

The lower-priced but flourishing condo market in Toronto, Canada's largest city, is expected to continue to thrive, with buyers discouraged by high prices for detached homes, the agency said.

"Higher sales of pre-construction condominium units in the past two years will continue to break ground throughout this year resulting in more condominium apartment starts," it said.

Canada's lengthy housing boom has sparked fears of a bubble, but a foreign buyers tax imposed in Toronto in April doused demand through the summer, particularly in the more expensive detached market. The condo market has seen strong demand, however, spurring groundbreaking on new units.

"Home sales have slowed, but with builders focused on condos that are started well after most of the units have been bought, it's going to be a while before quieter sales offices mean fewer cranes on the horizon," CIBC chief economist, Avery Shenfeld, said in a research note.

"Home building will be a growth contributor in the next couple of quarters, but we expect a significant drag from that sector by 2019," he said.