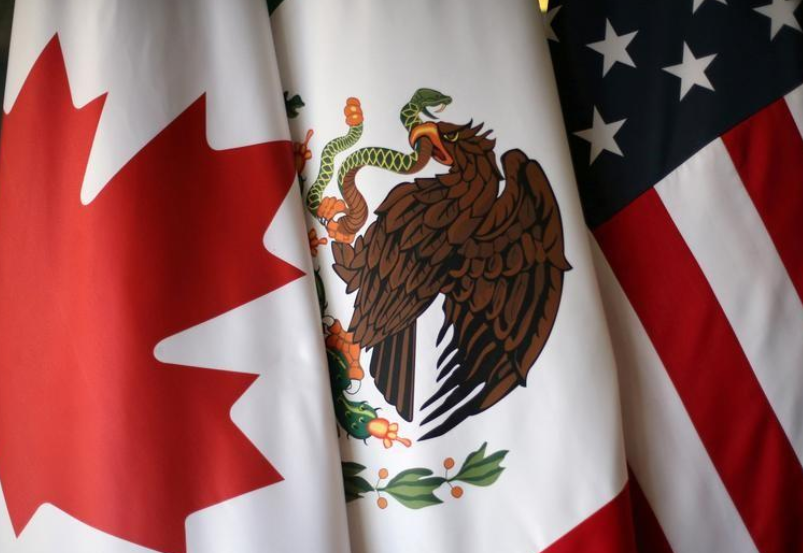 Flags are pictured during the fifth round of NAFTA talks involving the United States, Mexico and Canada, in Mexico City, Mexico, November 19, 2017. File Photo: REUTERS/Edgard Garrido

Canada on Friday welcomed US President Donald Trump’s suggestion that talks to modernize NAFTA could be extended beyond the end-March deadline, a move which might help break a deadlock at the negotiations.

Trump - who has long threatened to walk away from the 1994 North American Free Trade Agreement unless major changes are made - told the Wall Street Journal on Thursday that “a lot of things are hard to negotiate” ahead of a Mexican presidential election in July.

“I thought that was a sensible suggestion from the President. I think all of us are mindful of the Mexican elections,” Freeland told reporters on the sidelines of a Cabinet retreat.

She made her remarks amid signs that Canada and Mexico might be prepared to reverse their steadfast opposition to several US hard line demands for changes to NAFTA.

Markets are nervous about the prospects of disruption to the highly integrated North American economy. The Canadian and Mexican currencies fell on Wednesday after Reuters cited Canadian sources as saying they were increasingly convinced Trump would announce plans for a withdrawal.

Prime Minister Justin Trudeau later told reporters that he was optimistic the three nations would be able to agree on improvements to NAFTA while reiterating Canada’s stance that “we will not accept just any deal”.

In his remarks on Thursday, Trump repeated he was ready to announce a US withdrawal unless major changes are made but said he was “leaving it a little bit flexible” until after the Mexican election.

“We have always felt that imposing artificial deadlines was not necessary from the Canadian standpoint ... I thought that was a constructive proposal from the president,” said Freeland.

A Canadian source familiar with the talks said officials had been talking informally for weeks about the possibility of suspending the process this year but stressed no decisions had been made.

Canada and Mexico oppose US demands to establish rules of origin for NAFTA goods that would set minimum levels of US content for autos, a sunset clause that would terminate the deal if it is not renegotiated every five years and ending the so-called Chapter 19 dispute mechanism.

Freeland said on Thursday that Canada had come up with some creative ideas in a bid to unblock the talks.

Sources said some of the Canadian proposals related to autos content, an area where Mexico has recently indicated there might be room for compromise.