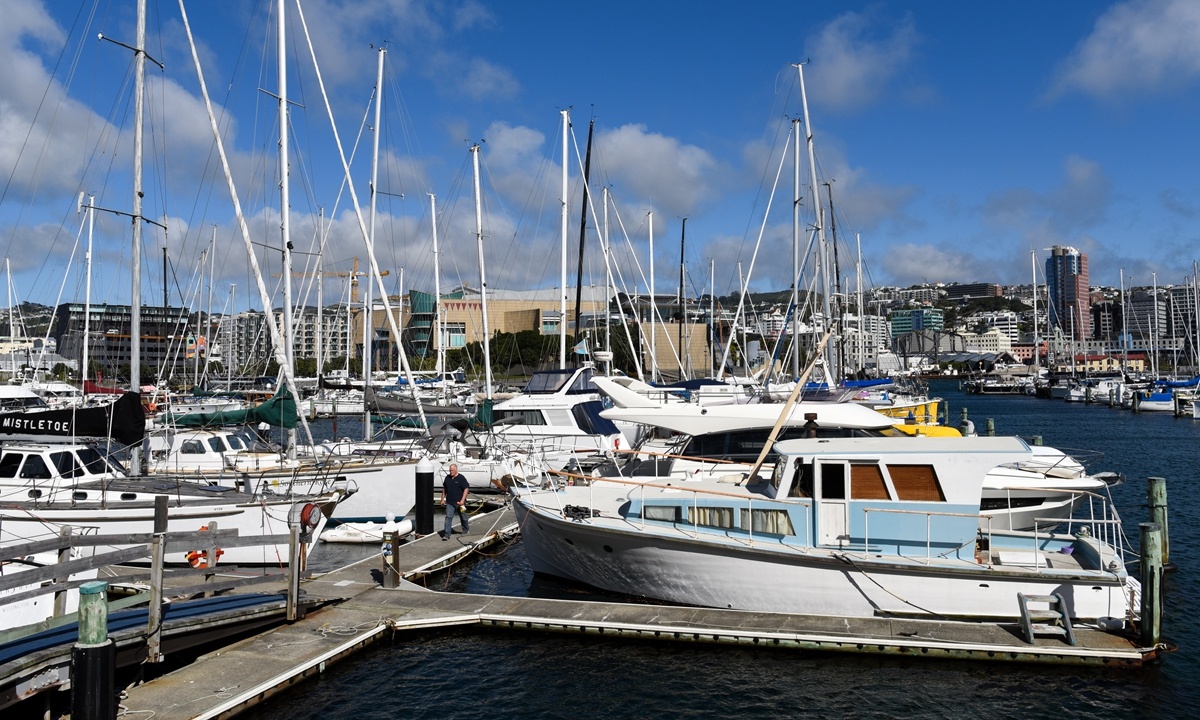 A man walks along a wharf in Wellington, capital of New Zealand, on September 22, 2020. Photo: Xinhua

China and New Zealand signed the upgrading protocol of their free trade agreement (FTA) via video link on Tuesday with new commitments in trade market entry, investment and other key aspects, sending a positive signal of partnership to combat the pandemic, and to support multilateralism and free trade.

Observers said that the China-New Zealand FTA serves as a model for Australia, which also signed a high-level FTA with China after nearly 10 years of talks, but its move to follow the US' lead under the Trump administration, provoking and vilifying China, has strangled healthy trade relations.

Based on the original China-New Zealand FTA signed in April 2008, the two sides will enjoy more benefits after the upgrading, according to a statement on the website of China's Ministry of Commerce.

China will expand opening-up of its aviation, education, finance and other sectors to New Zealand, based on the Regional Comprehensive Economic Partnership (RCEP), while New Zealand will relax the review threshold for Chinese investment, making sure that Chinese investment enjoys the same treatment as members of the Comprehensive and Progressive Agreement for Trans-Pacific Partnership (CPTPP), read the statement.

It's a huge sign of progress, compared with the existing NZ$10 million threshold, the report said.

In addition, the scope of industries that Chinese investors can participate in has been enlarged, to include services such as marketing, human resources, and tourism in New Zealand, said the report.

Bilateral trade is expected to see rapid growth, as the ratio of zero-tariff goods that China imports from New Zealand will be increased, boosting imports of good-quality New Zealand products, analysts said.

Chinese Foreign Ministry spokesperson Zhao Lijian stressed at a regular press conference on Tuesday that the upgrading of the FTA reflects the two sides' resolve to support multilateralism and free trade through their actions.

"China is willing to work with New Zealand and other countries in firmly supporting economic globalization, boosting free and convenient trade and investment, promoting rule and system-oriented opening-up, and constantly building a market-oriented international business environment ruled by laws in a bid to inject more momentum into the global economic recovery and jointly build an open world economy," Zhao said.

"This upgrade ensures the agreement is modern and deepens our economic relationship further," the New Zealand Ambassador to China Clare Fearnley told the Global Times on Tuesday. The Ambassador said this includes addressing issues like e-commerce, and putting an increased focus on environmental issues, including commitments to promote environment protection and a commitment not to lower environmental standards for a trade or investment advantage.

"Both New Zealand and Chinese exporters will benefit from the upgraded trade rules including through easier processes, reduced compliance costs, and expanded market access in some areas," the Ambassador said.

"As New Zealand's Minister for Trade and Export Growth, Damien O'Connor, said after the signing, 'This upgraded agreement comes at a time of considerable global economic disruption due to COVID-19. The upgraded FTA is part of the New Zealand government's trade recovery strategy, in response to the economic shock of COVID-19'," the Ambassador said.

Similar to New Zealand, Australia also is an export-driven economy and used to have sound trade relations with China, but Canberra's irrational disruption of its relations with Beijing, from banning Chinese 5G developer Huawei to heightening scrutiny of Chinese investments, destroyed the momentum.

China and Australia signed a free trade agreement in June 2015 that covers a dozen sectors including goods, services and investment, which directly drives up exports to China, especially of agricultural products.

For example, after the two countries signed the FTA in 2015, the market share for Australian wines in China rose by 8.9 percent as of 2019. The value of China's imports of Australian wine increased from $520 million in 2016 to $1.17 billion in 2019, according to Wine Australia.

However, China's imports from Australia fell 5.3 percent year-on-year to $114.84 billion in 2020, mainly due to deteriorating bilateral relations and the impact of the global pandemic.

"This sent a warning to Australia that it's wishful thinking to damage political relations with China while believing that economic and trade relations remain intact," Chen Hong, director of the Australian Studies Center at East China Normal University in Shanghai, told the Global Times on Tuesday.

Australia's provoking and smearing will only damage its reputation among Chinese enterprises and people, and hurt trade relations, Chen said, noting that "Canberra should consider Wellington as model and restore its relations with China by taking concrete action."