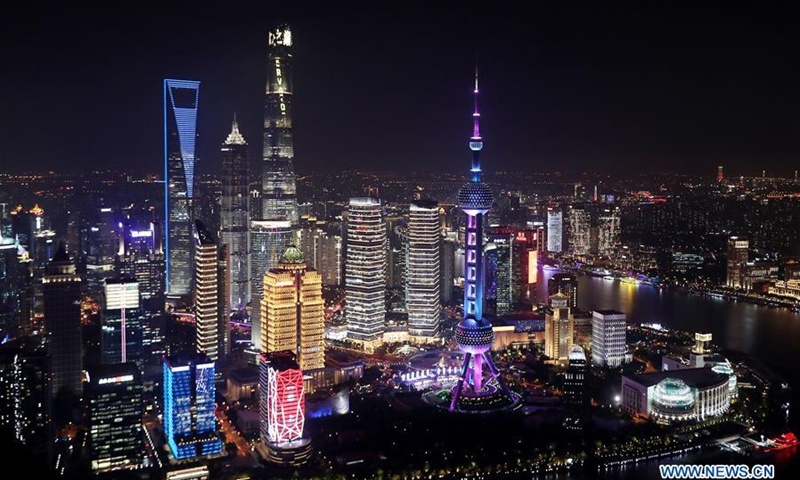 Photo taken on Oct. 26, 2020 from the Sinar Mas Plaza shows a view of the Lujiazui area in Shanghai, east China. (Xinhua/Fang Zhe)

"We had expected that the easing from 49 percent to 51 percent could take three to five years, but the actual opening-up speed has been beyond our expectations. [Such a fast step] involves risks, but the Chinese government has the resolve to push forward the policy," said Park Pu, chairman and CEO of JPMorgan Securities (China) Co.

Chinese regulators scrapped the shareholding limit on foreign securities and fund management firms on April 1 this year. In April 2018, China's securities regulator raised the foreign ownership limits to 51 percent in some financial sectors. 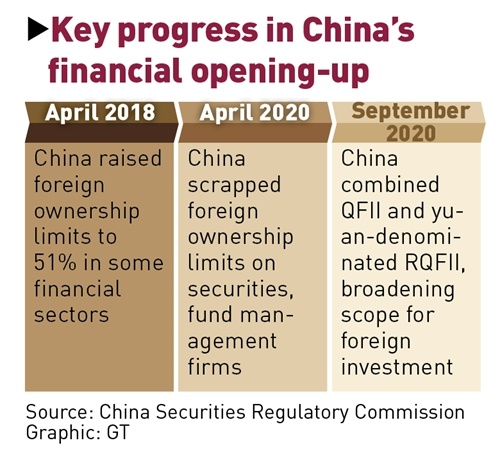 The US securities firm is one step closer to becoming the first wholly foreign-owned securities company in China.

JPMorgan now holds a 71-percent share of the JV. The remaining 29 percent is held by other stakeholders, including Zhuhai MLD Fund Management Co and Beijing Langxin Invest Co.

Pu said that the JV is looking for opportunities to become a wholly foreign-owned securities company. Industry observers predict that the US financial company will attempt to purchase the remaining stakes from the minority shareholders soon.

Pu made the comment on the sidelines of a meeting that was held to celebrate the 30th anniversary of Shanghai Pudong New Area's development and opening-up. In March, JPMorgan Securities (China) Co - a joint venture of JPMorgan and Chinese companies - made its debut in Pudong.

JPMorgan is also among the first batch of foreign-owned security firms in China.

"For financial institutions, there are some differences in the company management and operating capacity between [wholly owned and majority-owned.] If we owned 100 percent, it would help JPMorgan to mobilize global business to provide better services to Chinese clients," Pu said.

According to Pu, JPMorgan will "take a fast ride with Pudong's development to develop the company's business in China." JPMorgan also set up the first fully foreign-owned futures company in China in June.

Germany insurer Allianz is another foreign financial institution that benefits from China's push to open up its financial sector. In January, Allianz China Holding, the first fully foreign-owned insurance holding company in China, opened in Shanghai.

Chen Liang, vice general manager of Allianz China, said that becoming a fully owned company "means so much" for the firm's future strategy. The company could build a "financial aircraft carrier" that not only includes life insurance and special insurance policies, but also encompass an asset management company, Chen said.

"Our business used to be sporadic, but now we can integrate resources from many areas and plan in a comprehensive and far-sighted way," Chen told the Global Times.

The establishment of Allianz China and other wholly owned financial institutions will be examples for other overseas companies and inspire more to march into broader areas of business in the Chinese market, observers said. This kind of investment in China will make up for their shortfalls in other global markets.

"China is one of our two largest strategic markets, especially against the backdrop of zero or even negative interest rates in Europe," Chen said, while taking note of China's expanding middle class, which will generate huge demand for financial services.

Pu noted that China's market remains stable. "China is so far the only major economy in the world to have achieved positive economic growth," he added.

The high-level opening-up of China's financial sector will be one of the key focuses on the soon-to-be-released 14th Five-Year Plan.

Industry insiders also expect more "in-depth" measures in financial market opening-up in the next five years, in addition to measures that expand the scope of opening-up.

"We hope there will be more innovations in foreign exchange controls and that in turn would help us bring more business to China," Chen noted.

Industry observers predicted that in the detailed plan, there will be more bold measures in introducing high-quality foreign banking, insurance and securities firms to China's capital market.

For example, Chinese regulators could adopt the approach of pre- establishment national treatment plus negative list management on the entry of foreign financial institutions, rather than an approval system.

As part of the push for financial opening-up, China announced in September that it would combine QFII and RQFII, two inbound investment programs through which foreign institutional investors are allowed to trade in China's stock and bond markets. The new rule took effect on Sunday.

On Monday, UBS lent the Chinese stocks it had in its QFII account to the Chinese mainland market through UBS Securities, a joint venture securities firm in which it has a controlling share on the mainland.