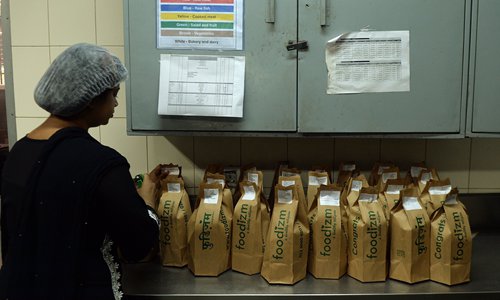 An Indian employee packs lunchboxes in the kitchen of an online food delivery firm in Mumbai, India. (photo: VCG)

Chinese internet giants that have been searching the world for good investment projects are now pumping their capital into India's food delivery industry, which is rapidly growing thanks to the rise of the younger generation and their burgeoning consumption power.

According to a report published by the Times of India on September 10, the tourism website is currently in talks to invest in India's online restaurant rating and food delivery platform Zomato as part of a financing round.

The report, which cited two people familiar with the matter, also noted that Ctrip is expected to invest about $100 million in Zomato.

Neither Zomato nor Ctrip had responded to an interview request from the Global Times as of press time.

"This allows the company to make money from restaurant advertising and also via commissions on food delivery," Satish Meena, an analyst from global research and advisory company Forrester, told the Global Times.

"Beyond capital, I think Ctrip can help to better monetization and scale up restaurant discovery and ratings applications for Zomato," he said.

With this venture, Ctrip has joined a handful of other big-name Chinese online companies that have invested in India's food delivery sector. For example, Ant Financial, the financial arm of e-commerce giant Alibaba Group Holding, has already pumped about $150 million into Zomato, a report from qz.com noted in June.

Investment from Ctrip and other internet giants comes at a time when more and more people are ordering takeout food in economy-flourishing India.

Khyati Shah, an Indian marketing professional, said that food delivery is developing at a fast speed in India due to the rising trend of ordering takeaways. "Just like in Shanghai, it's very common in big cities like Mumbai, Delhi and other metro cities for the younger working people to order takeout," she told the Global Times.

A report sent by market research provider Euromonitor to the Global Times pointed out a shift in Indian people's habits from eating at home to eating out, particularly for the younger generation.

According to the report, this habit change has led to the formation of a new group of consumers who eat out at least once a day.

Therefore, thanks to the desire to eat food cooked at restaurants, the food delivery industry is booming in India.

Data Meena sent to the Global Times shows that India's food delivery market is currently receiving around 40 million orders each month, compared with the 10-15 million monthly orders recorded in early 2017.

"In some Indian cities, the situation of food delivery is similar to that in China. There are those delivery vehicles like China's on Indian roads, but maybe not as fast and crazy."

Indian companies are also competing ferociously to grab shares in the local food delivery market. According to Meena, four delivery companies - Swiggy, Zomato, Foodpanda and UberEats - currently account for the majority of market shares, but there are also smaller players like FreshMenu and Fasos.

"The growing millennial population with disposable incomes and powered by smartphone adoption is going to bring growth in this industry in the coming years, and that's why we are seeing significant investment in the takeout food sector where investors including those from China are looking to back existing companies, so that they can take leadership positions in this segment," Meena said.

As food takeout and delivery services flourish, takeaways in India have been rolling out the red carpet for Chinese investors.

According to Meena, on Indian companies' side, rich Chinese investors fulfill their thirst for money-burning.

"In the past, we have seen [Indian] companies raising funds aggressively and spending [money] on discounting the same customer again and again instead of growing the number of buyers. Currently, the same phase is coming back into the food delivery industry where they [Indian firms] are investing aggressively in discounting and hiring delivery boys with more than double the salary as compared to last year," Meena noted.

"We are observing that the companies are passing delivery costs to customers and also increasing the commission from restaurants but are still not able to cover the overall cash-burn by these companies. It is going to be difficult for them to become profitable in the near term," he said.

But for Chinese companies, they consider such investment as a "strategic" choice, said Wang Chao, a veteran in China-India business cooperation. "They don't care about the short term, say, two or three years, of financial losses by those food delivery companies, because they want to bet on the [long-term] development space of the industry," he told the Global Times on Wednesday.

Food delivery is just a small part of Chinese e-commerce giants' investment in India's start-ups, with companies like Alibaba and Tencent investing in a string of Indian tech firms in areas like e-commerce, gaming and mobile payment - areas where they have already achieved huge success in China in recent years.

According to Meena, Chinese companies also want to utilize their experience gained at home to help build up Indian businesses in those segments.

But experts have cautioned that it is not necessarily the case that the success of Chinese companies can be copied in India.

A Chinese man surnamed Lv, who is currently working in Noida, East India, said that in the city, food delivery is rarely seen because there are very few restaurants on the streets, he told the Global Times.

According to Meena, compared with China, India will slowly adopt services like mobile payments and food delivery due to income limitations, low internet penetration and differing consumer habits.

"But Chinese companies have an advantage over Western ones when it comes to serving a large number of similar customers in Chinese markets. We are seeing that the companies are able to replicate the same strategies in sectors like e-commerce in India," he said.

Zhao Gancheng, director of the South Asia Studies Department at the Shanghai Institute for International Studies, said that many trends like mobile payments have not yet been entirely picked up by Indian consumers.

"They need to cross a threshold of popularization. Once that's done, the business will boom in India," Zhao told the Global Times on Thursday, adding that the smartphone has already "crossed that stage" and is now flourishing across the whole of India.