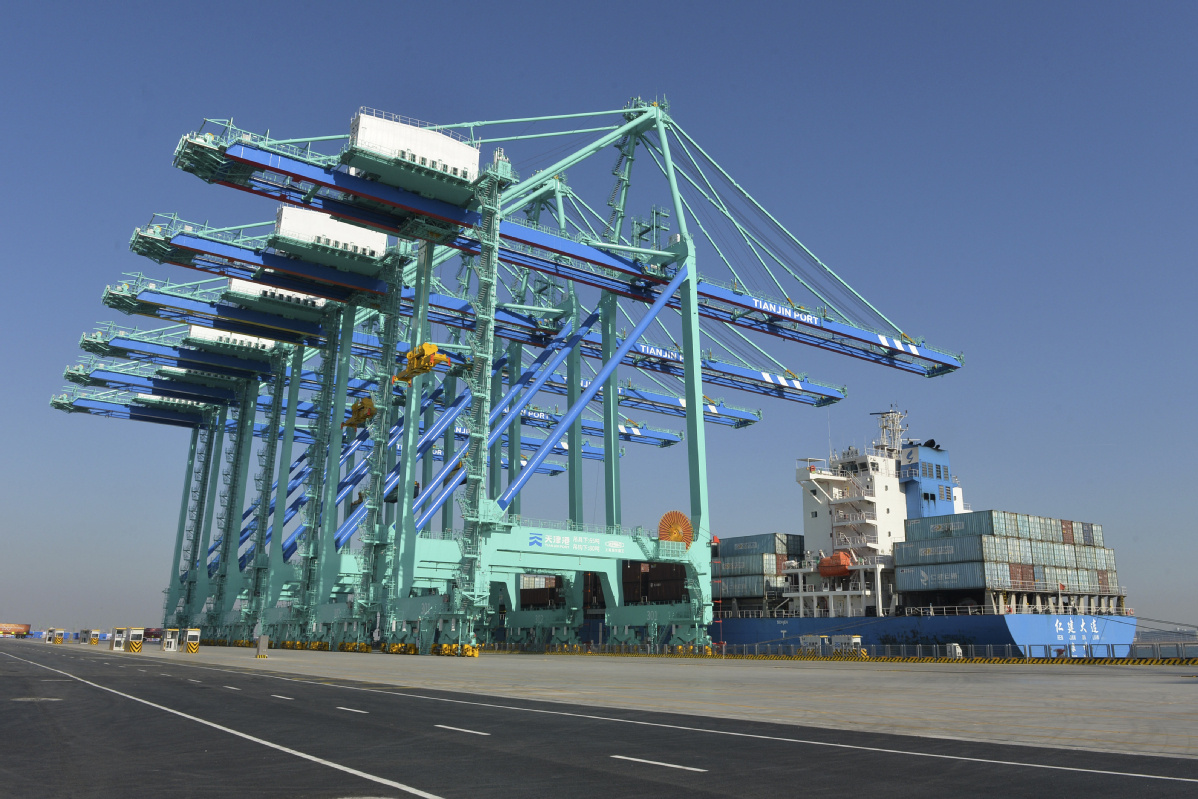 A container terminal in Tianjin Port, which is being built with zero carbon emission technologies. (Photo: China Daily)

Almost a month on since its launch on July 16, China's national market for carbon trading is taking baby steps toward long-term stability after the initial flourish and the expected subsequent slump, with experts stressing that more efforts are needed to improve the pricing mechanism.

The Ministry of Ecology and Environment said the market includes more than 2,000 companies in the power generation sector and covers over 4.5 billion tons of carbon dioxide a year for transaction, which makes it the largest emissions trading system in the world.

Experts, however, said the market can benefit more by including more companies from various industries. Such a step, they said, can promote market vitality.

Carbon trading is the process of buying and selling the permits to emit greenhouse gasses among companies that have such rights. Companies that emit more than allowable amounts can purchase more unused allowance from others.

The market's opening was considered one of the central policy instruments to fulfill the country's carbon commitments－carbon peaking by 2030 and carbon neutrality by 2060.

Transaction volumes in the national market have slumped in the past few weeks, sparking concerns over trade vitality and its influence on price.

On the inaugural day, about 4.1 million metric tons of carbon emission allowances were traded, with turnover reaching about 210 million yuan ($32.38 million).

Market entities, however, sought to downplay the slump, saying a decline was normal as some buyer companies turned passive once they accumulated adequate levels of carbon emission allowances.

Agreed Lin Boqiang, head of the China Institute for Studies in Energy Policy at Xiamen University. "China's carbon trading market is still at a very early stage of development with limited demand. It is inevitable to see the transaction volume shrink after a number of emitters finished purchasing the amount they need."

Some power plant owners, especially small and medium-sized companies, continue to adopt a waitand-see attitude because they have sufficient amount of free quotas. Some other companies still lack transaction permits because they are yet to complete registration work, despite preparations of all the parties concerned, according to a report by China Energy News.

An industry insider told CEN that the current allowances are relatively sufficient for many power plants and they are free of charge. This should help prevent the national carbon market from having an excessive impact on business operations in the short term. So, most power generation business owners choose to wait and see, and are not in a hurry to buy or sell.

The CEN report stated the carbon trading market has not yet allowed other industries to enter. The presence of just a few participants has led to insufficient market activity.

Wang Ke, a professor at the Center for Energy and Environmental Policy Research, which operates under the aegis of the Beijing Institute of Technology, told CEN that from the experience of pilot markets, many companies paid little attention to carbon emissions, and rushed to purchase a big amount of allowance right before routine checks from regulators and third parties. A similar situation might ensue in the national carbon trading market, which might see low trading volume on ordinary days and a surge in transaction before checks.

Some experts also worried that a continuous drop of transaction volume might lead to a decline in trading price, which is not conductive to the carbon market's primary function, which is to help reduce emissions.

Last week, carbon trading price reached a high of 59 yuan per ton and a low of 48 yuan per ton.

Li Zhiqing, director of environment and economic research at Fudan University, told CEN that in the early stage of development of the national carbon market, it is relatively reasonable to maintain the carbon price at 80 yuan per ton to 100 yuan per ton.

Liu Jing, associate dean and professor of accounting and finance at the Cheung Kong Graduate School of Business, said on Thursday at the 12th CKGSB Young Investors' Forum that increasing the cost of carbon emissions will help cut reliance on fossil fuels and promote the use of clean energy. Liu predicted the carbon price will rise in the future, and the fields of agriculture, industry, and transportation have big room for reducing emissions.

"In order to effectively guide companies to take the initiative to reduce emissions, carbon trading price needs to reach 150 yuan per ton to 200 yuan per ton in the period from 2025 to 2030," Wang said.

Li said it is necessary to prevent insufficient or excessive liquidity in the national carbon market, which will lead to fluctuations in carbon trading prices and thus affect the market's role of reallocating resources and controlling emissions.

Experts believe including more industries in China's carbon trading market will be an effective way toward a more active market.

"Currently, the market includes only the power generation industry. In order to cut emissions, companies in the sector need to either improve efficiency through technology and management or reduce production. Both ways are unlikely to realize as technology advancement takes up a long time for research and development, and sufficient power generation is essential to guarantee energy supply. Therefore, including more industries in the carbon trading market becomes an important way to boost market activity," Wang said.

Agreed Lin. "However, it'd help the market if the government encourages State-owned enterprises in the power generation sector to actively participate in the market. Power generation companies constituted the first batch, and going forward there will be more industries taking part in carbon trading activities."

The Ministry of Ecology and Environment said it has crunched the carbon emissions data collected over several years as part of concerted efforts to include more industries in the carbon trading market.

The CEN report noted tasks like data collection, analysis, and estimation of carbon emissions in the power generation industry are relatively easy. But such tasks could prove challenging in other industries. For, industries like steel and chemicals have various types of products with different levels of carbon emissions.

Zhou Dadi, former vice-president of the China Energy Research Society, said at the 12th CKGSB Young Investors' Forum that China is able to and should lead the technology development of decarbonization.

"In terms of decarbonization and zero carbon emission technology, China is currently at the same level compared to Western countries. In terms of system, capital, market of application, innovation, equipment manufacturing and engineering, China has an advantage over those countries.

"China should strive to peak carbon emission and reach carbon neutrality ahead of the timeline given out by the government, and lead the technology and market development in decarbonization and zero carbon emissions."