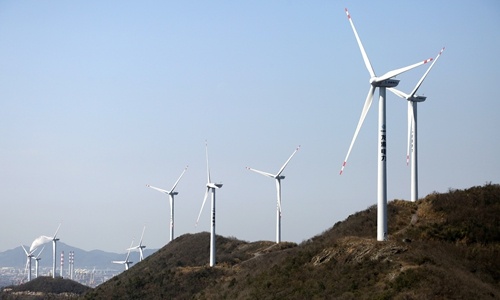 In 2019, total of 44.59 million kilowatt hours of electricity were fed into the grid, eliminating about 44,500 tons of carbon emissions in theory. (Photo: cnsphoto)

"Carbon could become a new currency, with China creating the terms, the standards and the pricing," said Deborah Lehr, vice chairman and executive director of Paulson Institute, at the International Finance Forum 2021 Spring Meetings held in Beijing on Sunday via video.

China will be at the heart of the climate business boom, not only because the scale of its emissions creates opportunity but also because it's becoming a leader in innovative green finance as well in green technology, she said.

Goldman Sachs has estimated that there is a $16 trillion opportunity for clean technology infrastructure investments in China's potential path to net zero by 2060. This could create up to 40 million jobs and drive economic growth.

China has started to open further to foreign firms in environmental goods and services, and the launch of China's carbon exchange will also create new opportunities, according to Lehr.

The country's national-level carbon emissions trading system will be launched by the end of June as scheduled, Liu Youbin, spokesperson for the Ministry of Ecology and Environment, told a press conference on Wednesday.

Xi Junyang, a professor at the Shanghai University of Finance and Economics, told the Global Times on Sunday that if China has carbon emissions pricing power, it will better accommodate domestic economic development while also contributing to its ambitious goal of net-zero emissions by 2060.

In order to enhance its pricing power, China must do more to encourage domestic enterprises to cut carbon emissions so as to increase the country's share in global carbon emissions trading, Xi said.

Meanwhile, China should open up the carbon emissions trading system to overseas institutions, and connect the international and domestic markets through carbon emissions derivatives, he said.

Zhou Xiaoquan, president of the Shanghai United Assets and Equity Exchange, said at a forum in Shanghai on Friday that the exchange, along with the Shanghai Environmental and Energy Exchange - which is responsible for building the trading system - and other financial institutions, will work to establish a multi-faceted carbon finance market in Shanghai to build the city into a carbon trading pricing center with international influence.

Domestic financial institutions will come up with new businesses such as carbon emissions quota repurchases and financial derivatives in the carbon trade market, while releasing a national carbon market price index at an appropriate time, he said.