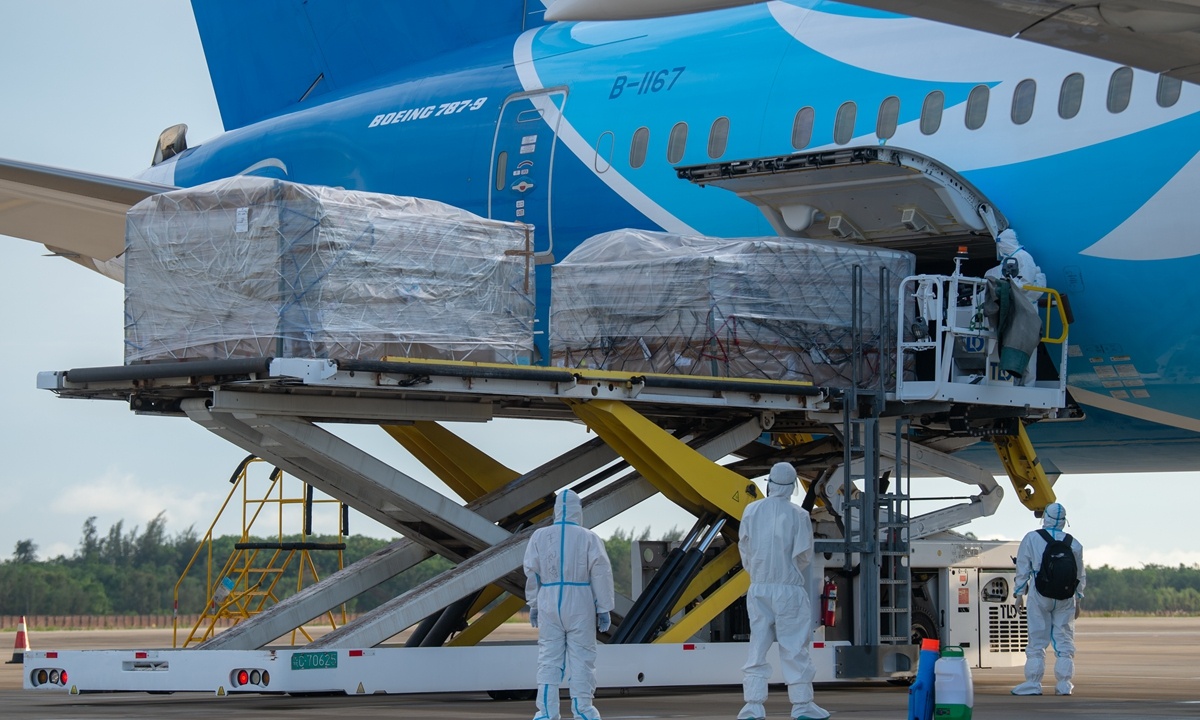 Chinese air cargo transport has continued on an upward trend in recent months, as more carriers embrace the cargo business.

Hainan Airlines on Wednesday launched a maiden cargo flight from Haikou in South China's Hainan Province to Sydney, the second fixed intercontinental cargo flight in the city after flying from Haikou to Paris.

The carrier said the plane will carry local vegetables and fruit to the city, and Australian milk powder, health products, and e-commerce goods can also enter China via Hainan.

Chinese e-commerce giant JD launched its first cargo flight between China and the US on Monday, following the launch of its China-Thailand charter flight at the end of May.

The route between Nanjing in East China's Jiangsu Province and Los Angeles will run three times a week by China Eastern Airlines.

Through launching warehouses in Shanghai and Shenzhen, the freight route will carry goods mainly include cross-border e-commerce products such as apparel and fast-moving consumer goods.

The development of e-commerce and express delivery industry in recent years has played a significant role in driving the growth of air cargo in both China and around the world. Since the outbreak of the epidemic last year, air cargo has played a huge and irreplaceable role in combating the virus, ensuring the efficient transportation of medical materials, equipment and vaccines around the world.

Shares of Eastern Air Logistics, the air freight subsidiary of China Eastern Airlines Group, jumped 44 percent on Wednesday upon their debut on the Shanghai Stock Exchange.

Airports have also benefited from the development of cargo business.

In the first five months of this year, cargo flights and cargo throughput of Shanghai's two major airports continued to operate at a increased frequency, recording a year-on-year increase of 27.08 percent.

Especially Shanghai Pudong International Airport, the world's third largest air cargo hub, had its cargo throughput of one million tons in the first quarter this year, while also setting a new high in a single month's cargo volume in April and May.

Shanghai Pudong International Airport Cargo Terminal Co said currently there are 64 airlines that use the terminal.

That makes it ranked the first in terms of cargo business, and those from the overseas carriers accounting for 80 percent.

Asia-Pacific airlines saw demand for international air cargo increase 9.2 percent in April compared to the same month in 2019, a significant improvement in performance compared to the previous month, according to IATA.

Due to the China-US trade disputes and the grounding of the 737MAX, Boeing's passenger aircraft sales in China are facing difficulties, but with the surge in e-commerce demand, Boeing is optimistic about the sales prospects across the Chinese freighter market.

Boeing said that freight aircraft has great room for growth when compared to commercial passenger flights.

The current domestic cargo aircraft fleet across China is about 200. Boeing predicted that in the next 20 years, the size of this fleet is likely to increase nearly three times, that is, to about 750.