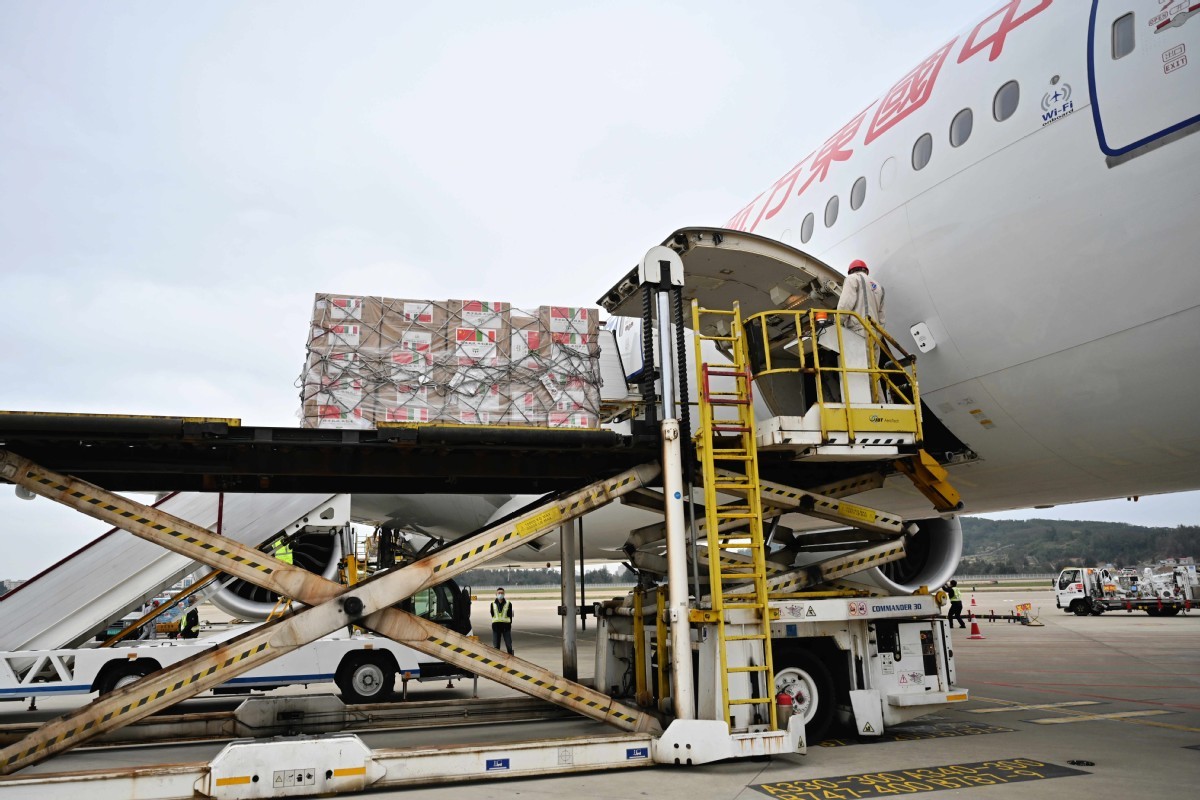 Medical supplies relating to COVID-19 prevention and control in Italy are loaded onto a cargo flight of China Eastern Airlines Corp in Fuzhou, Fujian province, earlier this year. (Photo: Xinhua)

State-owned cargo carriers should take the lead in developing an air logistics business and set up a mega logistics network that includes all types of transportation－air, rail, road and sea－according to the chairman of China Eastern Airlines Corp.

In order to realize high-quality and high-efficiency transport, China's air logistics business should move up the value chain, have faster distribution times and become smarter in the future, said Liu Shaoyong, chairman of China Eastern in his proposals during the ongoing annual two sessions.

"Under such complex and critical background, it's essential to guarantee the stability of global supply chains. We have seen the imbalance and incompetence in the international air transportation sector during the epidemic. The outbreak has shown that our air transportation capabilities cannot match the title of the world's factory," said Liu, who is also a member of the 13th National Committee of the Chinese People's Political Consultative Conference.

Being an important part of modern logistics, air logistics is playing a significant role in globalization. The International Air Transport Association said in a recent report that a 1-percent improvement in air cargo connectivity will translate into a 6-percent growth in trade volume.

The Chinese air cargo sector has made several significant strides in the past few years. The nation's cargo and mail turnover reached 7.53 million metric tons in 2019, second only to the United States. Improvements in services and a stable supply chain for air logistics sector have played a significant role in ensuring the stabilization of global supply chain.

According to Chen, China's logistics system can hardly match the nation's manufacturing capability, which requires the development of a logistics network that can deliver products end-to-end across the world.

"Chinese air cargo enterprises are still in an inferior position in terms of their international business when compared with other industrial giants, both in terms of network and distribution centers," said Lin Zhijie, an aviation industry analyst and columnist at carnoc.com, one of China's biggest civil aviation websites.

While cargo can be shipped to any corner of the nation within a few days, international cargo transportations is highly dependent on multinational logistics corporations like FedEx or UPS.

There is a long way to go for the Chinese air cargo sector to grow into the equivalent of its international peers in terms of scale. Fed-Ex alone operates more than 600 cargo carriers, while the total number of cargo aircraft owned by Chinese air cargo enterprises is 173, said Lin.

Experts said the establishment of a mega logistics network will be full of challenges.

Chinese road logistics is a brand-new area for air cargo enterprises, therefore, it requires cargo airlines to adapt to the fully competitive business as soon as possible, said Lin.

"Chinese enterprises have to be highly competent in risk control, efficiency, and be capable of making heavy investments, to achieve success in international logistics business," said Chen.

In addition to the air cargo proposal, Liu also called for national data security and enhancement in civil aviation management capabilities for public health emergencies, according to a report in People.com.

Liu said the central government must define the boundaries of reasonable data application, so as to ensure the development of big data whilst opting for effective data protection. He also urged the civil aviation sector to establish a public health emergency response system as soon as possible, so as to effectively lower the damages from future public health incidents.