BUSINESS Carmakers from China, EU should work together closely

Carmakers from China, EU should work together closely 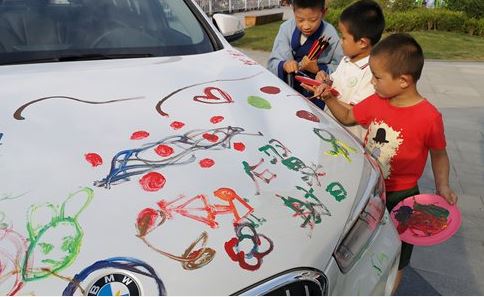 Children are invited to draw on a white BMW as part of a car dealer's promotion on Saturday in Heze, East China's Shandong Province. (Photo: VCG)

China and Europe should cooperate further in the auto industry, as doing so could help to enhance regulatory collaboration and harmonize global standards especially by working more closely in international organizations where global technical regulations are drawn up, said an EU industry representative.The remarks were made by Erik Jonnaert, secretary general of the European Automobile Manufacturers' Association (ACEA), in an email to the Global Times. They were also made as passenger vehicle sales in China continue to decline.In May, sales fell 17.4 percent year-on-year, the China Association of Automobile Manufacturers (CAAM), the country's biggest auto industry association, said on Wednesday.Nonetheless, Jonnaert told the Global Times that he believes the Chinese market, which remains the world's largest auto market in terms of size and market potential, will remain important to all vehicle manufacturers. ACEA represents the 15 major Europe-based car, van, truck and bus manufacturers including BMW Group, Daimler, Volkswagen Group and Volvo Group, according to its website."We also see new opportunities created by the move toward more electrification as well as toward more connectivity and automation. These opportunities do not only exist for passenger cars but increasingly also in the segment of heavy-duty vehicles," he noted.China is the world's biggest new-energy vehicle (NEV) market, and NEV sales have been rising despite a decline in overall car sales. In 2018, NEV sales reached 1.26 million, an increase of 61.7 percent, according to Dong Yang, vice president of the CAAM. The number accounted for more than 50 percent of global NEV sales, which stood at 2 million.NEVs are one of the main sectors where the two can cooperate, as "Both Europe and China try to address climate change and work to reduce emissions from road transport," said Jonnaert.EU automakers have been aggressively expanding their footprints in China amid the trend. For instance, Volkswagen plans to build a fully electric sport utility vehicle for China from 2021, Reuters reported. German carmaker BMW has made China an export platform for its new electric models, despite uncertainty about tariffs and the trade conflict between China and the US.In Europe, Chinese company BYD is the top supplier of pure electric buses, with a market share of more than 20 percent, Xinhua reported.Cooperation projects between companies of China and Germany are also common to see, For instance, German charging network producer Hubject is cooperating with Star Charge China, to cooperate in electric charging stations.In mid-2018, BMW awarded a contract worth over 1 billion euros (about $1.13 billion) to CATL, according to Reuters. CATL also has business connections with other German car producers like Daimler and Volkswagen.Cooperation between the two, which are the world's No.1 and No.2 carmakers, represents the future, said insiders.In face of rising uncertainties and increasing protectionism in the global economy, Jonnaert said the European automotive industry continues to believe in the importance of a rule-based multilateral trading system supported by the WTO. "Automotive companies in Europe have become truly global operators and strongly believe in the importance of collaboration and dialogue, including with China, to ensure that trade can flourish and help support our respective economies," he noted.