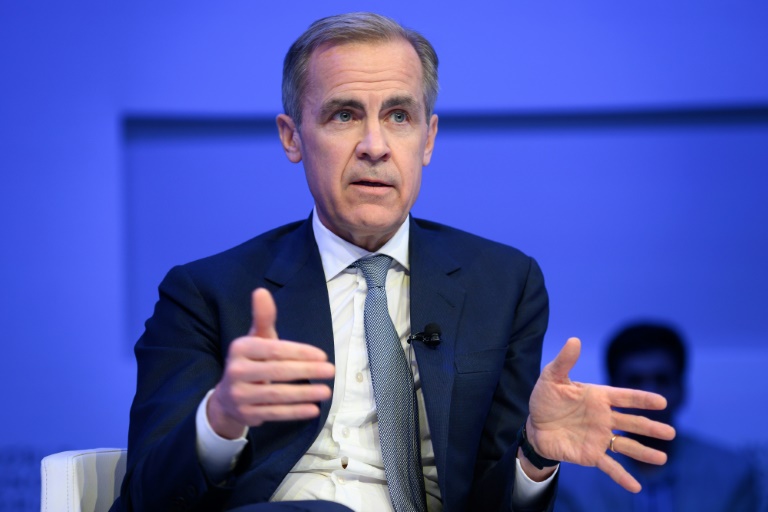 Bank of England head Mark Carney is expected to back an interest rate cut when the bank meets later this week. (Photo: AFP)

Bank of England governor Mark Carney steers his final interest-rate meeting this week that could end with a cut on the eve of Brexit to boost Britain's stalled economy.

The BoE announces its rate decision on Thursday after a meeting of the Monetary Policy Committee (MPC), whose nine policymakers including Carney each have a vote on where borrowing costs should stand.

If, as some analysts forecast and the BoE does cut its main rate by a quarter-point to 0.50 percent, it is expected that it would be a result of Carney -- soon to become UN special envoy on climate action and finance -- joining forces with other doves in delivering a change.

Britain departs the European Union on Friday ahead of an 11-month transition period during which time Prime Minister Boris Johnson's Conservative government will seek to strike new trade deals with the EU and countries worldwide.

Carney earlier this month stressed that Britain's economic recovery was "not assured" despite Brexit finally happening.

"The (UK) economy has been sluggish, slack has been growing and inflation is below target," said the Canada-born central banker.

"As is entirely appropriate, there is a debate at the MPC over the relative merits of near-term stimulus to reinforce the expected recovery in UK growth and inflation," Carney added.

Analysts said his comments increased the likelihood of the BoE cutting borrowing costs this week, although there remains a chance that the MPC does nothing after some recent positive British economic data offset weaker figures at the end of 2019.

"January's interest rate decision is shaping up to be one of the closest for some time," noted Ruth Gregory, senior UK economist at Capital Economics research group.

"It is possible that governor Carney's imminent departure will sway January's rate decision. It is not difficult to imagine Carney voting to cut rates in a move reminiscent of ECB President Mario Draghi's decision last September to loosen policy only a few months before Christine Lagarde took over," Gregory added.

Whatever the outcome, Andrew Bailey, head of the UK's Financial Conduct Authority regulator, will replace Carney as BoE chief on March 16 after the incumbent agreed to put back his departure three times to help steer the British economy through Brexit's delays.

Carney took up the post in July 2013, with the UK economy struggling to recover from the global financial crisis and the Bank of England's main interest rate at a then record-low 0.50 percent.

Following Britain's 2016 referendum vote in favour of leaving the European Union, Carney led the BoE in slashing the rate to a new low of 0.25 percent.

It rose back to 0.75 percent to help curb UK inflation caused by a Brexit-fuelled weak pound pushing up import costs.