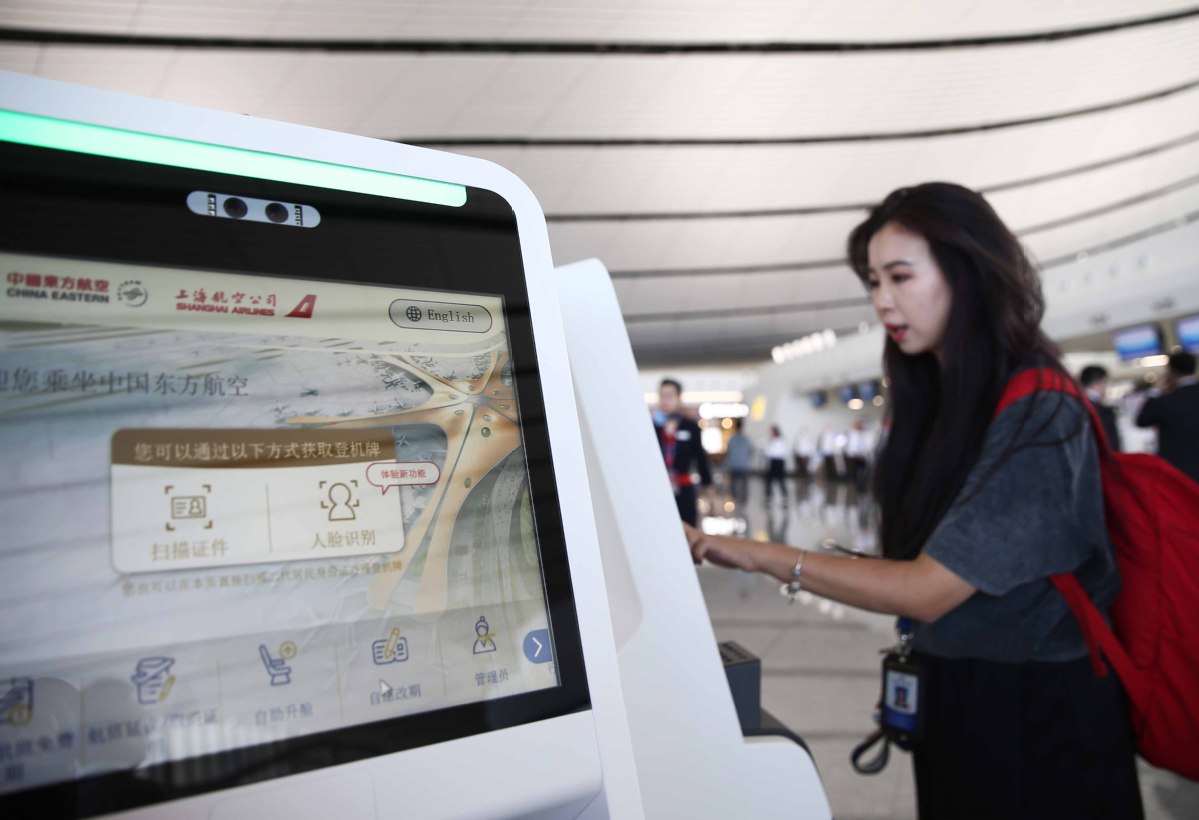 A passenger uses a facial recognition device before boarding a flight at the Beijing Daxing International Airport. (Photo: China Daily)

Shanghai-based China Eastern Airlines will become the first carrier globally to use 5G networks after it starts pilot operations for the same at the newly opened Beijing Daxing International Airport. Such a move will help the airline to provide smarter services such as facial recognition for check-ins and boarding.

With a total planned investment of over 120 billion yuan ($16.9 billion) at Daxing airport, the largest terminal worldwide, China Eastern aims to help passengers achieve paperless travel with the integration of 5G networks and artificial intelligence.

"The development of 5G and other smart, convenient services has been a major trend for the aviation industry in recent years, and global carriers are striving to develop such services," said Zou Jianjun, a professor at the Civil Aviation Management Institute of China.

"We are still in the initial development stage and unsure about the future, but Chinese airlines hope to lead the development of 5G and smart services, and play an important strategic role in growth in the age of Industrie 4.0," he said.

Passengers can get a one-time facial recognition registration with the self-help machines at Daxing airport, and then they will be able to go through all the processes, including ticket purchases, check-ins, bag checks, security checks, and boarding, by facial recognition. There is no need to show any identification documents, China Eastern said.

"At the various smart machines in the Daxing airport, passengers can check flight status and gate information, weather conditions of their destination, and the rough time needed to walk from certain locations to their boarding gates," said Huang Lin, director of ground services for China Eastern at Daxing airport.

Meanwhile, China Eastern will also introduce battery-free electronic baggage-checking tags, which will allow passengers to track the luggage status on their mobile phones. The e-tag is like an ID card for the suitcase.

When passengers arrive at the airport, they can self-check-in the luggage with the e-tag and self-service machines, and check luggage status by scanning the bar code during the whole process of bag transportation. After pilot operations at Daxing, the carrier will use e-tags at more major routes and hub airports in China, and will also provide individual tailored e-tags, China Eastern said.

On Wednesday, along with six other airlines, China Eastern operated its first flight with an Airbus A350 aircraft from Daxing to Pudong airport in Shanghai. The first group of passengers experienced facial recognition technologies at the airport.

China Eastern will gradually shift all its flights to Daxing. By March 2020, most of its flights, except those between Beijing and Shanghai, will be transferred to Daxing.

With the opening of the Daxing airport, China Eastern will get more international flight rights from Daxing to destinations like Paris and Moscow. In the next few years, it is looking to increase its market share in Beijing with more slots and capacity, the company said.