The Chinese auto industry attracted much attention at the ongoing two sessions in Beijing, as top policymakers discussed a wide range of issues from new-energy vehicles (NEVs) to autonomous driving to the development of domestic brands.

The Government Work Report delivered to the opening meeting of the 13th National People's Congress (NPC) talked at length about a policy agenda for the vehicle industry for 2018, including ways to support various segments of the industry. 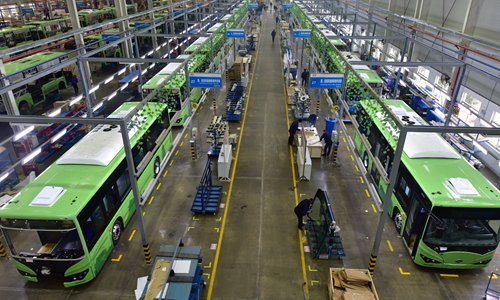 Workers at the assembly line of BYD's electric bus production base in Xi'an, capital of Northwest China's Shaanxi Province in January 2018. (Photo: VCG)

Deputies to the NPC and members of the 13th National Committee of Chinese People's Political Consultative Conference (CPPCC) also made many policy suggestions.

NEVs were highlighted at this year's two sessions and mentioned in the Government Work Report for the 10th consecutive year, according to media reports.

Minister of Industry and Information Technology Miao Wei, who attended the two sessions, told reporters on Sunday that China was the world's largest in terms of NEV production and sales in 2017 for a third straight year. He said that development of NEV technologies made significant progress.

"The level of energy density in batteries our country produces has improved 200 percent compared with the level in 2012 and the price per kilowatt has declined 70 percent from 2012," Miao said.

However, there are still problems and challenges to the development of the NEV sector, some NPC deputies and CPPCC national committee members pointed out.

Wang Fengying, an NPC deputy and CEO of Great Wall Motor Co, listed three issues as counterproductive to the country's NEV push in her proposal to the NPC.

"First, local protectionism persists. There are still cases of [local governments] establishing local directories or technical requirements higher than the national standards and setting up obstacles for non-local NEV companies that want to enter their markets," Wang wrote.

Second, she said, there are problems with local governments' implementation of cash incentive policies for NEV purchases such as policy discontinuities and loopholes, and these issues have affected companies' decisions.

Third, there should be more effort to make it more convenient for people to drive NEVs, including building better charging facilities, Wang said.

"The Chinese auto industry has entered a new era of electrification, but NEVs still face problems such as a shortages of charging infrastructure," Xu said.

Autonomous driving was also a hot topic at the ongoing two sessions, with some NPC deputies and CPPCC national committee members pushing for the industrialization of self-driving cars and laws covering their use.

"Autonomous driving technology is at the early stage of industrialization. Whether government policies can catch up to the technological progress, to some extent, will determine the speed and competitiveness of the industry's innovation. China urgently needs to increase its innovation in the policy area," Li wrote in his proposal.

Zeng Qinghong, an NPC deputy and chairman of Guangzhou Automobile Group, proposed that China should offer legal support for self-driving cars to be tested on the road, saying current laws and regulations do not support the development of these vehicles.

"China should strengthen legislation related to self-driving cars … and, on the premise of ensuring safety, speed up the establishment of special laws and regulations regarding tests of self-driving cars," Zeng wrote.

Zhu Huarong, an NPC deputy and president of Chongqing Changan Automobile Co, suggested that China should have a global advertising campaign and use government procurement procedures to help Chinese brands expand overseas.

"[The Chinese government] should support special procurement to use Chinese-brand cars at major political events and for governments and public transportation systems," Zhu wrote in his motion.

Yin Tongyue, an NPC deputy and chairman of Chery Automobile Co, said there should be more funds under the Belt and Road (B&R) initiative to help domestic brands expand in relevant markets.

"In the implementation of the B&R initiative, many funds created by the Chinese government are not compatible with the auto industry," Yin said, adding that the government should guide more funds into the sector and get more financial institutions to support car firms' global expansion plans.

At the ongoing two sessions, officials also vowed to further open up the Chinese auto market.

The Government Work Report listed the NEV market as an area in which the country would boost access for foreign companies. The extended tax rebate for NEV purchases would also benefit foreign carmakers that sell NEVs in the Chinese market.

Furthermore, the Government Work Report said that China would reduce tariffs on imported cars to "actively open up the Chinese market to boost industrial upgrading and improve the trade balance as well as provide more options for consumers."

In a separate move to reduce costs for foreign cars to enter the market, the General Administration of Customs scrapped the three-month bonded storage period for imported cars at several free trade zones under the so-called parallel import program, effectively saving storage costs for importers and allowing time for sales and marketing efforts, the Fujian Daily newspaper reported on Sunday.