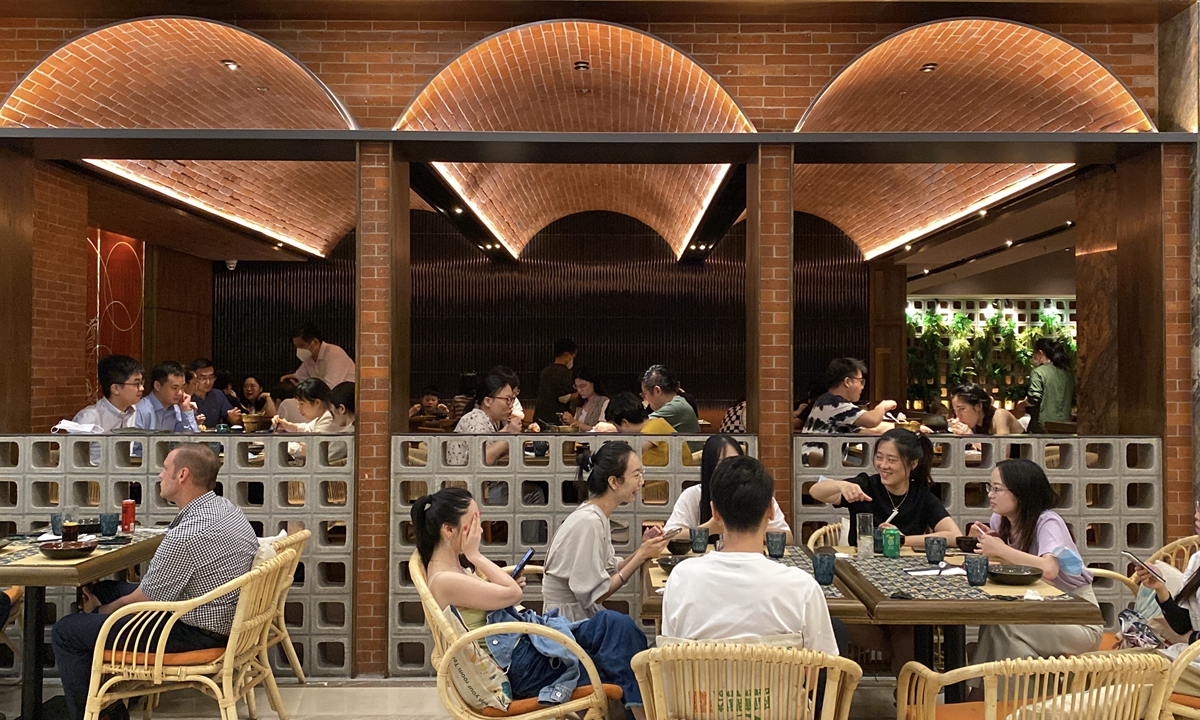 The recovery of the catering sector has progressed steadily in the past month after Shanghai resumed dine-in service from June 29, with many restaurants seeing the return of customers. In addition to dine-in business, which was a weak link amid COVID-19 outbreaks, many restaurants are actively exploring new models such as take-out meals and semi-finished products to explore development strategies.

According to Chinese food delivery platform Meituan, as of Wednesday, transactions online at restaurants soared by 20.2 percent from the same period in June across the country, boosted by the resumption of the catering business in Shanghai.

A manager surnamed Hou from a Haidilao hotpot chain store in Shanghai told the Global Times that the store saw strong pent-up consumption after it resumed dine-in service at the end of June.

At the height of recent outbreaks, many restaurants actively participated in the supply of daily necessities through community group purchase, take-out and other forms of business, which have become new growth points for restaurants.

Haidilao said it expanded the take-out business in mid-June with the launch of a new business unit focusing on take-out service, live-streaming and e-commerce, providing new set meals that are different from the in-restaurant experience such as fast meals and premade food.

According to a statement sent by Haidilao to the Global Times, take-out orders in Shanghai soared by 582.2 percent in June from a year earlier and profits grew by 23.7 percent. Take-out orders in Beijing increased by 481.3 percent year-on-year in June and profits rose by 16.1 percent.

In the context of the normalization of epidemic prevention and control, premade dishes, including semi-finished dishes, instant dishes and cooking packages, have become a new growth point for the development of the catering industry.

According to Meituan, sales of premade vegetables in 2021 increased four times from 2020. The value of prepared dishes on Jingdong Supermarket during this year's 618 shopping event increased 231 percent from a year earlier.

Nearly 68 percent of the restaurants in Beijing have seen business recover to more than 50 percent of the normal level, after dine-in service resumed on June 6, according to a survey launched by Beijing Cuisine Association.

In the survey, 13 percent said their customer flow had been fully restored while another 19 percent said it had yet to recover to 50 percent.