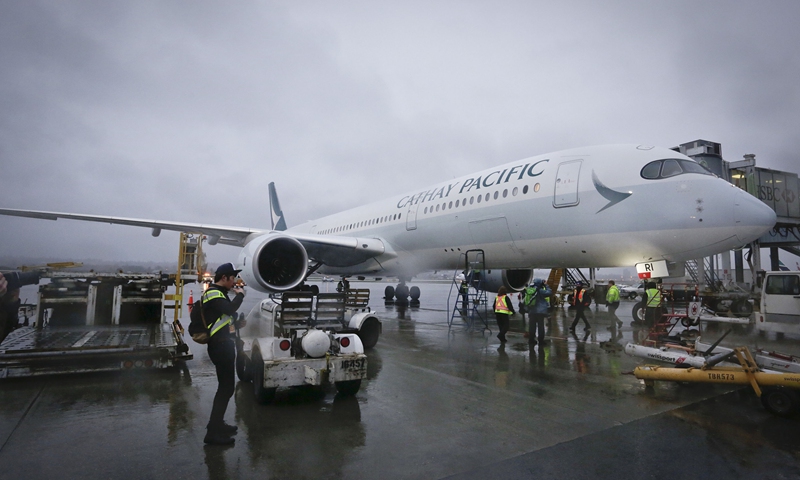 Cathay Pacific will cut approximately 8,500 positions in the entire group, accounting for around 24 percent of its established headcount, and one of its major regional airlines Cathay Dragon will cease operations to cope with the fallout of the global pandemic, the company said on Wednesday.

The Hong Kong-based carrier said in a press release sent to the Global Times that about 5,300 local employees and 600 employees based outside of Hong Kong will be made redundant, while new recruitment has been frozen.

The group said that executive pay cuts will continue throughout 2021 and a third voluntary Special Leave Scheme for non-flying employees will be introduced for the first half of next year.

The restructuring will cost approximately HK$2.2 billion ($329 million), which will be funded by the group through its internal resources.

The decision was made in the light of a slow recovery of the aviation industry as the global pandemic continues to have a devastating impact on the industry.

"We expect to operate well under 25 percent of 2019 passenger capacity in the first half of 2021 and below 50 percent for the entire year," Cathay Pacific Chief Executive Officer Augustus Tang was quoted as saying, noting that the new restructuring will reduce the group's cash burn by about HK$500 million per month.

As Hong Kong and multiple other markets continue to implement travel restrictions and quarantine measures, the group axed a large number of flights amid demand slump in September. Cathay Pacific and Cathay Dragon carried a combined 47,061 passenger trips last month, a plunge of 98.1 percent year-on-year. In the first nine months, the number of passenger trips it carried slumped 83.2 percent year-on-year, data from the group showed.