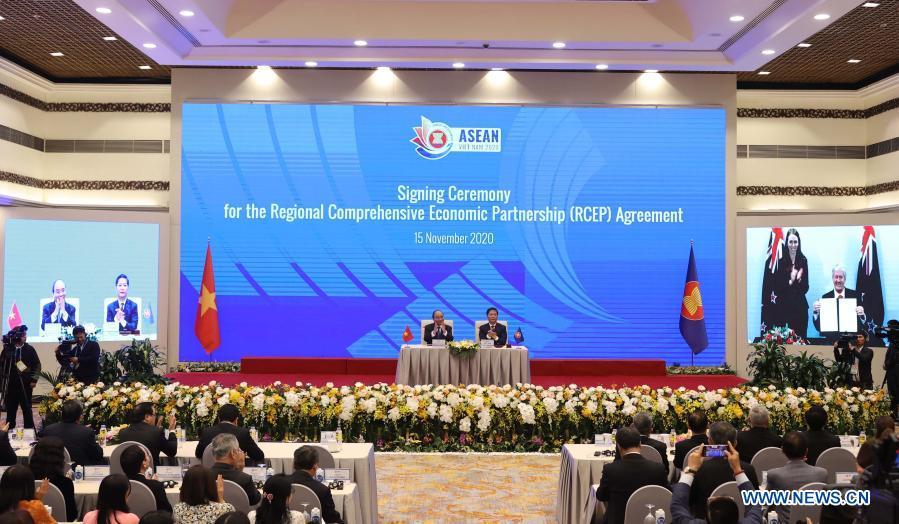 The signing ceremony of the Regional Comprehensive Economic Partnership (RCEP) agreement is held via video conference in Hanoi, capital of Vietnam, on Nov 15, 2020. [Photo/Xinhua]

The Regional Comprehensive Economic Partnership (RCEP) agreement, which involves all 10 member countries of the Association of Southeast Asian Nations and five of its major trading partners-China, Japan, South Korea, Australia and New Zealand -- was officially signed on Nov 15 at the 4th RCEP Summit.

Premier Li Keqiang called Nov 15 "a milestone moment" because the RCEP agreement represents not only a landmark achievement of East Asian regional cooperation, but also, and more importantly, a victory of multilateralism and free trade.

The China Chamber of Commerce to the European Union (CCCEU) lauded the agreement, believing it will help shape the world's largest free trade bloc featuring the largest population, the most diverse membership and the greatest development potential. It also said that provisions in the agreement pertaining to deep tariff cuts, rules of origin and other content are expected to bring more tangible benefits for businesses involved in the pact soon after being put into effect.

CCCEU Chairwoman Zhou Lihong noted that the conclusion of the agreement offers an uplifting example of international economic cooperation affected by protectionism and unilateralism; and it also boosts confidence in global recovery of economies hit by recession amid the COVID-19 pandemic.

"Right now, China and the EU are racing towards ending negotiation of the bilateral investment treaty (BIT) by the end of this year. We are looking forward to the conclusion of this long-awaited agreement," Zhou said.

She added that "We are also expecting to put bilateral free trade talks on the official agenda as soon as possible, which could then offer solid framework of trade and investment liberalization and facilitation in two major markets consisting of almost 1.9 billion consumers."