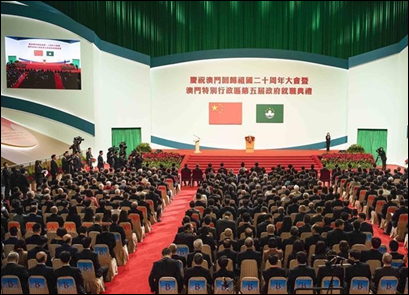 A gathering in celebration of the 20th anniversary of Macao's return to the motherland is held in south China's Macao, Dec. 20, 2019. (Photo: Xinhua)

Officials and business representatives in Macao say they are confident that the special administrative region is able to build up its financial industry with its own characteristics for future development, with the central government providing firm support.

Addressing a gathering to celebrate the 20th anniversary of Macao's return to China on Friday, Chinese President Xi Jinping urged Macao to focus on selected aspects and projects based on the region's conditions and well-conceived procedures to appropriately diversify its economy, the Xinhua News Agency reported.

Macao should grasp the opportunity brought by the building of the Belt and Road Initiative (BRI) and the Guangdong-Hong Kong-Macao Greater Bay Area, Xi said.

Xi's Macao visit would include the announcement of new policies aimed at diversifying the city's casino-dependent economy into a financial center, Reuters reported last week, citing officials and corporate executives.

However, the reported measures were not announced on Friday.

The concept stocks related to the Macao stock exchange slid by 3.85 percent on Friday. Stocks connected to the concept of the Greater Bay Area closed 0.84 lower on the Shenzhen bourse.

For Macao's enterprises that invest in Hengqin, the State Administration of Foreign Exchange launched on Friday supporting measures, including lifting limits and simplifying procedures.

"These policies will lay a deep foundation to construct the Macao-Hengqin cross-border financial cooperation demonstration area," Liang Haiming, dean of the Belt and Road Institute at Hainan University, told the Global Times Friday.

Macao is the off-shore market, and Hengqin is the on-shore one. "Their interdependent development is fully anticipated," said Liang.

Macao's banks are encouraged to set up branches in the mainland. Mainland's insurance funds can be invested in the SAR. Meanwhile, leasing firms based in the mainland are supported to operate their business in Macao.

Relying on the gambling industry, which contributes to half of its GDP, Macao has reached a point where it should diversify its economy based on its own conditions and explore fresh growth engines, and there is huge potential for the city, officials and experts said.

"Our future market will be extended to the Greater Bay Area, serving the market through more diversified financial services, as Macao's financial sector would also grow from commercial bank-based to featured financial services, including financial leasing, wealth management and yuan-denominated services," Chan Sau San, chairman of the Monetary Authority of Macao, told the Global Times Thursday.

In terms of financial leasing, Macao is expected to play a more active role in connecting countries and regions along the BRI, while Macao has a very high savings rate and limited financial products, which would be further explored, Chan said.

The Macao SAR government hired a global consultancy to study the establishment of a yuan-denominated securities exchange in October.

"The bond market is now our major focus, and we've been working on the fundamental structure of a bond market," Chan said.

China's Ministry of Finance issued yuan-denominated bonds worth 2 billion yuan ($285 million) in Macao in July. The sale of such bonds was a first for the SAR.

Macao enjoys free market advantages under the "one country, two systems" principle, and the Basic Law of Macao states there are no foreign exchange control policies, allowing the city to have an open financial system to connect with the mainland and the world, the chairman noted.

"As the country has been pushing forward the internationalization of the Chinese currency, Macao is expected to contribute more on this aspect," he said.

The People's Bank of China, the country's central bank, on Wednesday issued a statement to further facilitate individual cross-border renminbi remittances in Macao by raising the daily limit from Macao to Chinese mainland accounts under the same name to 80,000 yuan from 50,000 yuan, a move to facilitate trade as well as people-to-people exchanges between Macao and the mainland.

Starting Friday, residents in Macao can open accounts of mainland banks in the city.

"The current phase for Macao is to realize a differentiated development path with cities in the Greater Bay Area instead of competing with each other. We want to contribute to the whole financial sector in the area with our features," said Chan.

While Macao is expected to find a different path than Hong Kong, rather than pursuing large-scale exchange markets, it could tap into some specialized, subdivided business, Pansy Ho Chiu-king, the predominant businesswoman in Macao, told the Global Times Thursday.

"Hong Kong and Macao are still very different. It's more business-driven in Hong Kong. In Macao, we need to shoulder responsibilities when it comes to how to use our platform in serving the national development plan," Ho said.

As Hong Kong eyes connecting Western countries such as the UK and the US, Macao could expand its scope among emerging markets. There have been a lot of high-tech start-ups in the Greater Bay Area, which are likely to easily raise funds on traditional international exchange markets. "Macao could take a shot at this," she said.

Liang added that the SAR will shoulder the responsibility of yuan's internationalization.

"Through the local stock exchange, more yuan-based investment products can be created and Macao can further build up its role as an off-shore center and a regional financial center.

"Fintech, mobile payments and green finance… these new trends are disrupting traditional financial system and market rules. If Macao can grasp opportunities in the change, it will not only benefit the local financial sector, but also the Greater Bay Area, while further improving China's international influence in this regard."

Macao's standing in the Greater Bay Area will give momentum to its economic diversification move, but that will take time.

To achieve its role in the financial center with Macao's characteristics, some challenges remain, especially on talent and law, according to Wu Zhiliang, president of the Macau Foundation.

"Macao has legal fundamentals but part of it needs to be modernized, in particular, in the financial sector," said Wu, adding that if the SAR wants to shoulder more financial functions, it needs to ramp up efforts in related legislation.

How to attract talent to jointly build up the financial platform also needs to be considered since the city has relied on Hong Kong for financial investment for a long time, he noted.

Despite current obstacles, Macao has a good development foundation, which can help improve its own structural problems, said Wu.