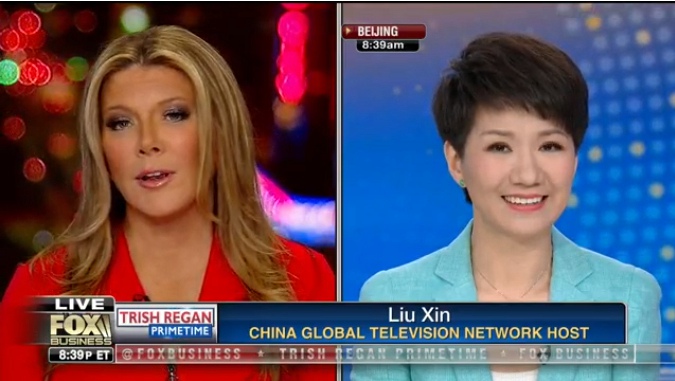 It is the first time that television hosts from China and the U.S. are facing off live. The much-anticipated event has sparked widespread attention from the media across the world.

Here are the highlights of the discussion:

Liu Xin: I need to correct you. I am not a member of the Communist Party of China. I am here (on the show) to speak for myself as a CGTN journalist.

Trish Regan: What is your current assessment of where the trade talks are. Do you believe a deal is possible?

Liu Xin: The talks were not very successful last time, and both sides are considering where to go next. The Chinese government is very clear.

Liu Xin: There is consensus among Chinese people that no country or individual can protect itself without intellectual property protection. Isolated cases do not mean that America is stealing or Chinese people are stealing.

Liu Xin: When we talk about tariffs it's not just between China and the U.S. If you don't like the rules, then let's change the rules, but it has to be done as a multilateral decision.

Trish Regan: How do you define state capitalism?

Liu Xin: We would like to define it as socialism with Chinese characteristics, where market forces are expected to play the dominating or deciding role in the allocation of resources.

We want it to be a market economy but there are some Chinese characteristics, for example, some state-owned enterprises which play an important but smaller role maybe in the economy.

We are a socialist economy with Chinese characteristics, but we are not just state controlled, we are quite mixed, very dynamic and very open as well.

Liu Xin: If you look at the overall size of the Chinese economy, don't forget we have 1.4 billion people. If you divide the second largest economy in the world, when it comes down to per capita GDP we are less than one-sixth of the U.S.

We can do a lot of big things, and people are looking upon us to do a lot more around the world.