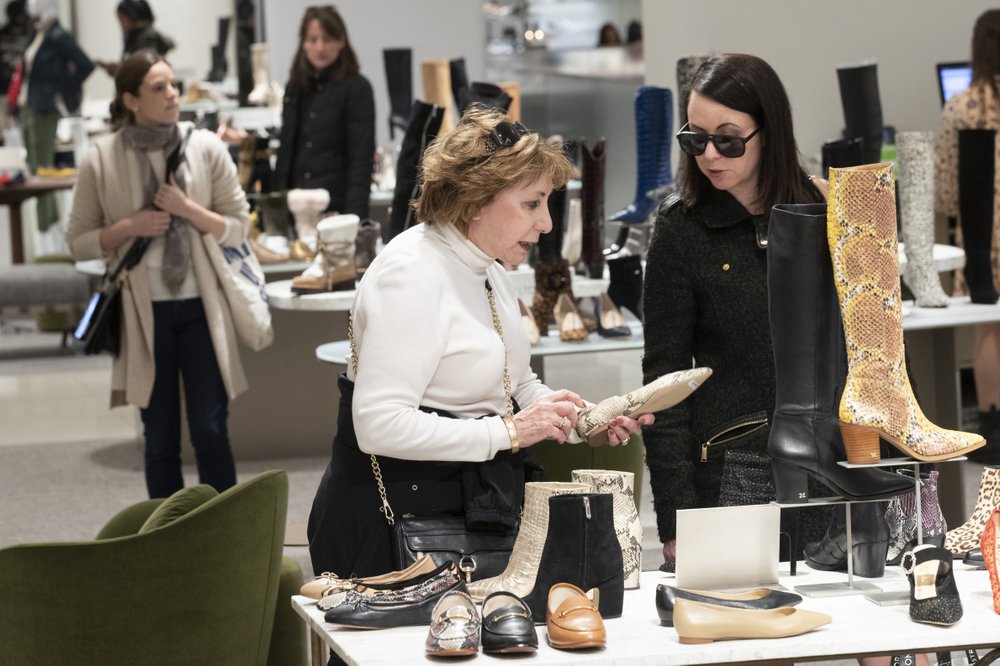 In this Tuesday, Nov. 26, 2019, photo shows customers shopping in the shoe department at the Nordstrom NYC Flagship in New York. (Photo: AP)

To get that monogram tote bag by Louis Vuitton or leather Flashtrek sneakers by Gucci, the go-to place had been luxury department stores.

Now, there are far more options to access exclusive labels. You can buy them at online sites like Netaporter. Or get them barely used through sites like Fashionphile and The RealReal. You can even rent an entire rotating wardrobe through companies like Rent the Runway.

“The consumer is king. And they can buy luxury brands in different places,” says Steve Sadove, former CEO and chairman of Saks Fifth Avenue and now senior adviser a MasterCard.

The new entrants have disrupted the luxury sector by creating different channels to attain the seemingly unattainable. For luxury department stores that once had a lock on where the well-heeled could shop, that has forced them to reimagine their approach. They now offer new services as well as food and alcohol to lure back customers who were once exclusively theirs.

At Nordstrom’s women’s flagship in Manhattan, for instance, customers sip champagne and nibble on small bites while trying on shoes. Recognizing the growing popularity of second-hand sites, Neiman Marcus is rolling out shops where customers can sell their designer belongings as part of a partnership with Fashionphile, an online resale accessories company. And as part of a $250 million renovation of its flagship store in Manhattan, Saks Fifth Avenue has dedicated its main floor to luxury handbags that’s staffed with 50 handbag style advisers, in addition to sales associates.

Meanwhile, brands like Gucci and Louis Vuitton are opening more of their own stores and expanding online. Robert Burke, a luxury consultant, says they are trying to control their future as they watch their products get discounted on resale sites.

In one sense, traditional luxury stores are no different than other brick-and-mortar retailers that must now fiercely compete with online rivals. But the exclusivity they used to command by catering to a niche market of wealthy spenders is beginning to erode, especially among the new-moneyed set of shoppers in their 20s through their 40s who can afford high-end merchandise but may still be looking for a deal.

Millennials and Generation Z accounted for 47% of luxury consumers in 2018 and for 33% of all luxury sales worldwide in 2018, according to a study by consulting firm Bain & Co. Together, however, they contributed to virtually all of the market’s growth, compared with 85% in 2017.

Overall, the global market for personal luxury goods is healthy, buoyed by a strong economy and the spending power of China. The sector reached a record high of $286.53 billion (260 billion euros) in 2018 — a 6% increase from the year before, according to Bain. Jewelry in particular has been one of the top luxury growth categories.

In the U.S., luxury sales excluding jewelry have fallen 1.9 % through November compared to a 3.4% increase in overall retail sales excluding autos and gas, says MasterCard SpendingPulse, which tracks sales across all types of payments. That’s in part because of store closures and a drop in international tourists.

The 42-year-old banker from Manhattan says she’s doubled her annual spending on jewelry and clothing to $20,000 in the last few years. But while she used to shop at places like Saks and Bergdorf Goodman, now she’s spending most of the money on sites like The RealReal or Netaporter. If she buys at Saks, she uses the retailer’s online personal shopping service.

“E-commerce gives you a wider playing field versus going to the store,” Gill said.

The fragmented luxury market has hurt retailers like Neiman Marcus and Nordstrom. Sales at stores open at least a year at Neiman Marcus fell in its latest fiscal third quarter as it was forced to heavily discount. The drop, reported in June, reversed six straight quarters of increases. The privately-held retailer hasn’t publicly reported sales since then.

Nordstrom department stores saw net sales down 4.1% even while its more price-sensitive Nordstrom Rack stores had a 1.2% increase in the latest quarter ended Nov. 2.

Neiman Marcus decided to invest in a minority stake in Fashionphile earlier this year after its own survey showed half its customers buy or sell pre-owned luxury items. Geoffroy van Raemdonck, CEO of Neiman Marcus, says the luxury business used to be about the product; now, it’s more about the services.

Nearly 30 Nordstrom stores now have Rent the Runway drop-offs as part of a partnership with the rental service. The new women’s flagship store in New York also features seven eating and beverage spots — the most of any Nordstrom store.

“Clearly, shopping is much more about an experience,” said Jamie Nordstrom, president of Nordstrom stores and the great-grandson of the company’s founder. “It’s not just about getting through their lists. They want to bump into something new, something they didn’t come into find. I think great stores do that well.”