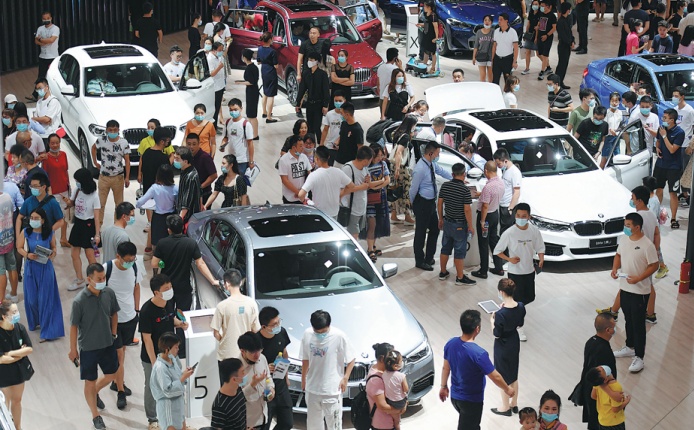 Chengdu, capital of Sichuan province, is most well-known for spicy hotpot and pandas. But for people in the automobile industry, the city's appeal doesn't stop there, especially this year.

Due to the pandemic, the annual Geneva motor show in Switzerland was canceled and the biennial Beijing auto exhibition has been delayed.

So the Chengdu auto show, which kicked off on Friday and continues to Aug 2, is the first major offline gathering for carmakers, dealers, reporters and visitors this year.

The annual event attracts over 120 Chinese and international brands ranging from Wuling and Geely to Mercedes-Benz and Rolls-Royce, according to the event's organizing committee.

A total of 16 models made global debuts and 26 had their China premieres on the first day of the motor show.

Around 2,700 reporters are covering the event, and the number of visitors to the week-long exhibition could reach 700,000, the committee said.

Analysts said as the pandemic is basically curbed in China, the auto industry, which is currently using a lot of livestreaming to sell cars, needs a major offline event to remind people of what things were like in pre-pandemic days.

"Luxury is sometimes beyond words. You have to sit in the car to feel it," said one senior executive at a premium carmaker.

And what Chengdu offers is more than a chance to go through the motions. The city itself has vast market potential, which is probably an even more attractive thing.

Chengdu has more than 5 million vehicles on its roads, second only to Beijing in the country, according to the China Passenger Car Association, and it is thus the most important market in western China.