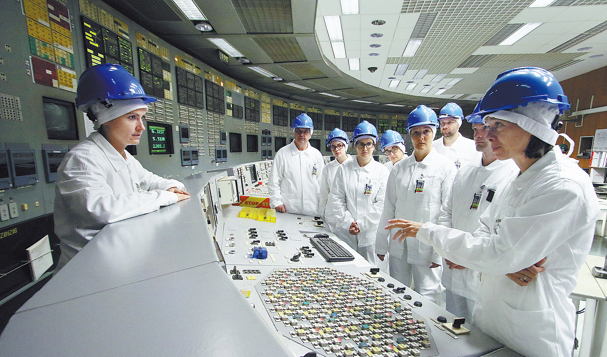 Staff talk inside the monitoring room inside the inoperative Ignalina nuclear power plant in Visaginas, Lithuania, on July 31. (Photo: Agencies)

IGNALINA, Lithuania－Walking along the top of Lithuania's decommissioned nuclear reactor, which was a set for HBO's critically acclaimed Chernobyl TV series, tourist Vytas Miknaitis says he's not "afraid at all".

"They know what they're doing," the retired computer engineer from Chicago says, referring to organizers of the three-hour tour of the Ignalina power station in eastern Lithuania.

Similar in design to the Chernobyl reactor nearly 450 kilometers away, Ignalina provided the backdrop for the show's outdoor scenes, shot last year.

The state's only nuclear power plant built in Soviet times was open to the public even before the Chernobyl drama first aired in May but has since seen a steady uptick in visitors on the heels of the show's success.

Tourists don white overalls, walk on top of the reactor and tour the various work stations, including a command post built to resemble the one in the series.

They can even pretend to be the protagonists pushing the various buttons.

Ignalina plant spokeswoman Natalija Survila-Glebova said that the series had attracted a new stream of visitors, mostly Lithuanians but also foreign tourists from countries like Poland, Latvia and the United Kingdom.

Last month, there were 900 visitors, she said, adding that tours were "almost completely booked through the end of the year". Due to the ongoing dismantling work, tours are only open to adults.

The Soviet Union's Chernobyl plant, in what is now Ukraine, was the scene of the world's worst nuclear disaster, when one of its reactors exploded in 1986 during testing.

It polluted a big part of Europe, with the area immediately around the power plant the worst affected by radioactive emissions.

In recent years, the abandoned site has become a "dark tourism" destination, even before the eponymous US TV drama that has picked up 19 Emmy nominations.

Lithuania, like Ukraine, is a former Soviet republic. It began decommissioning Ignalina in December 2009.

The European Union made its closure a condition of the small country's 2004 admission to the bloc because the plant had two reactors that were the same model as those at Chernobyl.

Chernobyl tours have also sprung up in other parts of Lithuania where the series was filmed, including the capital, Vilnius.

Visitor Vytautas Kastanauskas, who works in tourism, marveled at how the producers were able to recast parts of the picturesque city as a Soviet-era industrial outpost.

"The atmosphere of the time and the nature of the relationships between people, everything was recreated perfectly in the series," said the 47-year-old, who experienced Soviet times.

The northern Fabijoniskes neighborhood was transformed into Pripyat, a city of nearly 50,000 people near Chernobyl that was abandoned after the disaster.

The makers of Chernobyl used the drab, gray district, with row upon row of Soviet-era housing blocks, as the location to shoot Pripyat's mass evacuation.

One young Lithuanian has even refurbished his grandparents' Fabijoniskes apartment in the Soviet style and opened it up to visitors and Airbnb stays.