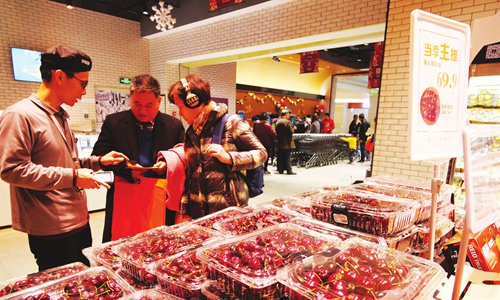 Customers shop for Chilean cherries at a supermarket in Guangzhou, the capital of south China’s Guangdong Province on December 31, 2018. (Photo: IC)

Chile is expecting to export more cherries to China as the Chinese New Year is drawing near, President of the Chilean Fruit Export Association Ronald Bown has said.

According to Bown, the South American country is forecasting record cherry exports of 210,000 tons for the 2019-2020 season, up 16 percent compared with last season.

Noting that China accounted for 88 percent of Chilean cherry exports last year, Bown said he hopes the Asian country will continue to be the top market for such exports.

The Chilean cherry industry has invested 5 million US dollars so far this year to further boost sales in China, he said.

The industry insider said that Chilean cherry exporters are seeing the upcoming Chinese New Year, which will fall on Jan. 25, 2020, as a great business opportunity.

The Chinese New Year usually increases sales, because the Chinese people like to give cherries, whose ruby red color conveys good luck and prosperity, to friends and family as gifts, according to Bown.

"You're supposed to have a greater supply of cherries following that date, which means our advertising efforts should be stepped up after the celebration," said Bown.

To ensure the fruit arrives in optimum condition, time is essential, said Bown, referring to the latest change Chile has made in exporting cherries to China.

The first cargo flight carrying more than 100 tonnes of cherries arrived in the city of Ningbo, in east China's Zhejiang Province, last Wednesday, after over 30 hours of travel from Chile. Traditional shipping by cargo boat would have taken 20 to 25 days.

"Once picked, they are generally processed the same day and shipped as quickly as possible to their destination markets," Bown said.

"The current situation in Chile has touched all Chileans, certainly, and we hope it is resolved as soon as possible. (But) so far, it has not had an impact on cherry exports," he said.