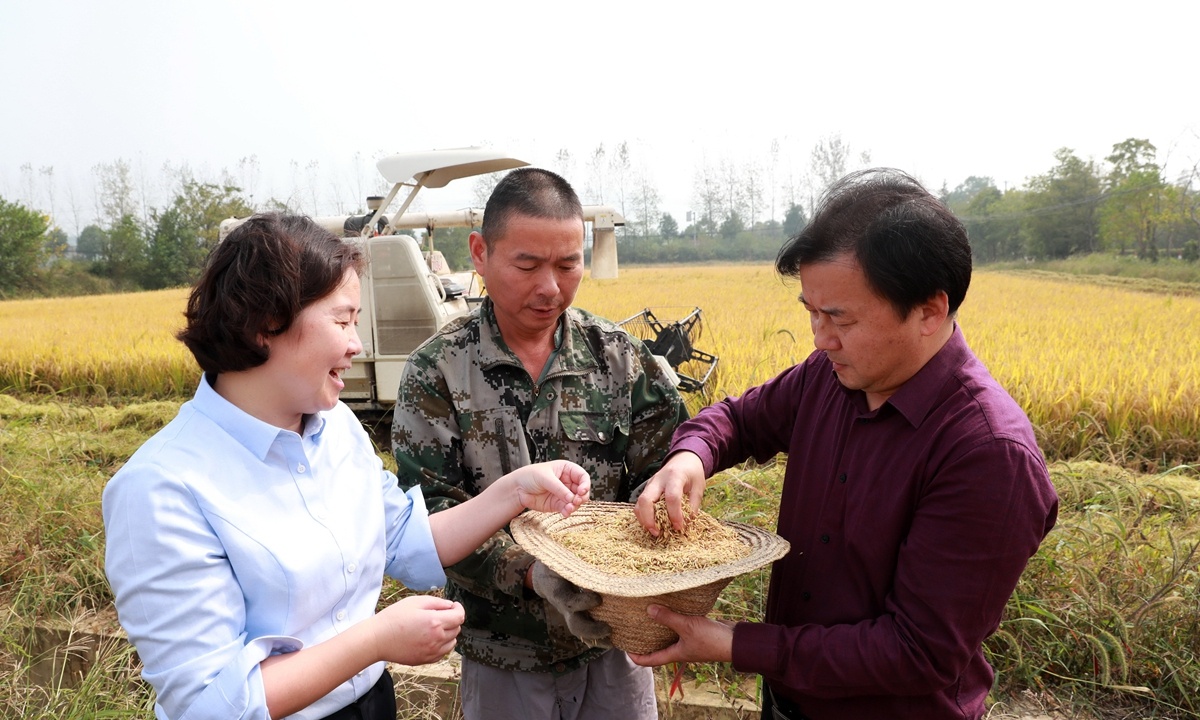 Farmers in Wuhan, Central China's Hubei Province, inspect grain on Tuesday. China's grain output will likely rise this year as the autumn harvest is generally guaranteed following bumper crops of early rice and summer grain, according to the Ministry of Agriculture and Rural Affairs. (Photo: cnsphoto)

China can absolutely ensure its domestic grain supply, but still needs imports and multiple import sources due to structural problems and offering market for other countries, which will be a long-term trend in China's grain strategy, Chinese officials and agricultural experts said.

In the face of risks and challenges brought about by the COVID-19 pandemic, plant diseases and insect pests since the beginning of the year, China's summer grain output still reached a record high of 142.8 billion kilograms this year, 1.21 billion kilograms more than that of the previous year.

Moreover, China is expected to secure bumper autumn harvest this year, with stable supply of grain, said the Minister of Agriculture and Rural Affairs Han Changfu.

"China's grain supply is quite abundant this year, and there's no doubt that we can ensure absolute food security at home," Li Guoxiang, a researcher with the Rural Development Institute of the Chinese Academy of Social Sciences, told the Global Times on Thursday.

Analysts said as the world will celebrate the World Food Day on Friday, China's ability of ensuring food security is also a boon for the world when the pandemic has cast a shadow and brought uncertainties to global grain supply, and China's eradication of hunger is a huge contribution to global food security.

Although China mainly relies on itself for food supply, it still needs certain imports, such as soybeans and high-quality wheat. China's imports of food crops have been stable in recent years, with grain imports accounting for only 2 percent of its domestic output - which means China's import volume will pose no threat to world food security either.

According to latest data released by Chinese customs, in the first three quarters of the year, imports of grain reached 253.36 billion yuan ($37.69 billion), an increase of 20.7 percent year-on-year.

Chinese customs spokesman Li Kuiwen told a press conference on Tuesday that China will fully guarantee the imports of key products, and continue to expand the scope of importing countries and commodities in the next phase, adding that it will continue to increase the protection of important agricultural products and food such as meat, grain, aquatic products, and fruits.