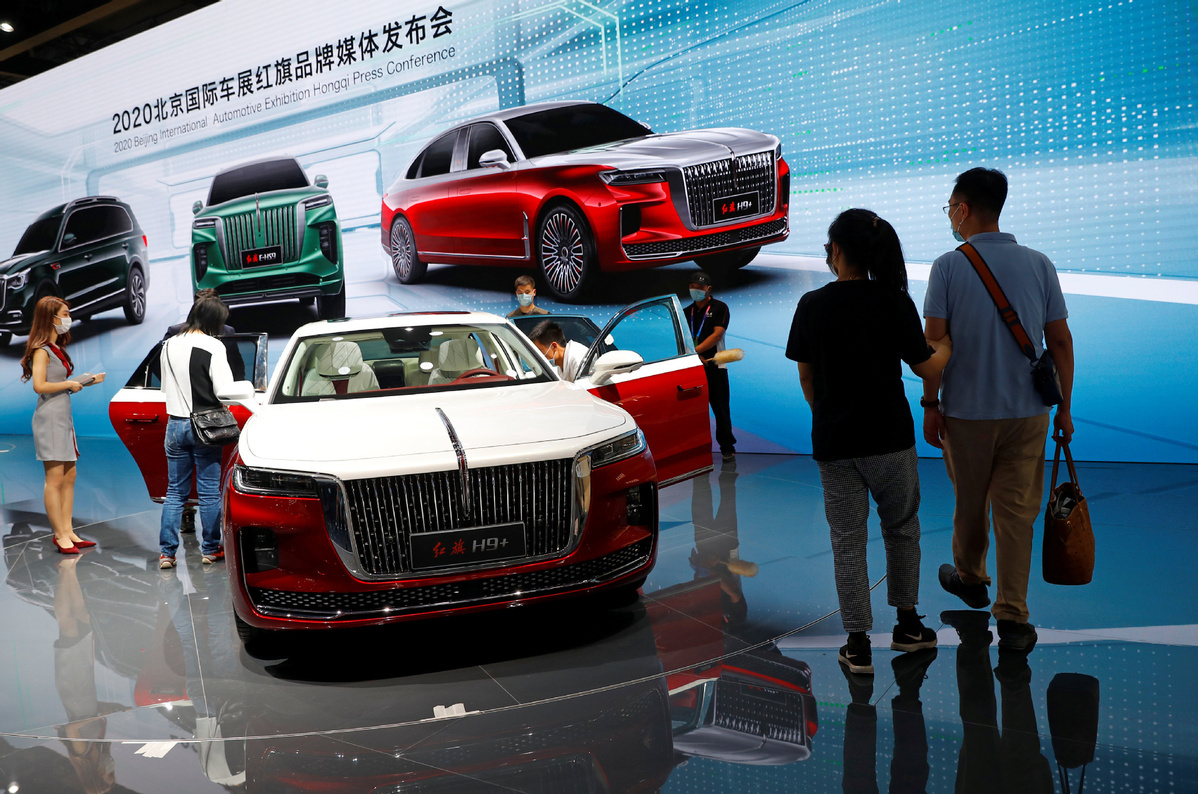 Visitors look at the FAW Hongqi H9+ at the Beijing International Automotive Exhibition, or Auto China show, in Beijing, on Sept 26, 2020. [Photo/Agencies]

Promotion campaigns will be carried out for vehicle purchases in rural areas and trading in used cars for new ones. In rural areas where conditions permit, residents will also be encouraged to buy trucks with a capacity no bigger than 3.5 tonnes and passenger cars with engines no bigger than 1.6 liters.

The authorities will also subsidize car purchases for people upgrading from gasoline-powered vehicles with a national emission standard of three or below to speed up the phasing out process. The construction of parking lots and charging piles will be stepped up.

Since the beginning of this year, various favorable policies introduced by the central government and local governments have stimulated potential demand in the auto market and accelerated the domestic auto market's recovery.

According to the China Association of Automobile Manufacturers, about 2.55 million automobiles have been produced in China in October, and roughly 2.57 million have been sold, with a year-on-year growth rate of 11 percent and 12.5 percent, respectively.

The number of automobiles produced and sold has grown for seven consecutive months as of October. The sales of passenger cars in China are expected to realize double-digit growth in 2021, according to Jiang Xueqing, a researcher at Orient Securities.

Jiang believes that as demand has gradually stabilized recently, companies with business related to passenger cars, parts and components have been favored by the market, and their valuations have been gradually restored.

It is expected that the auto climate index will continue to rise in the fourth quarter, according to Jiang.

"At present, the prominent restraint on economic development lies in consumption as the main growth engine was seriously affected by COVID-19 earlier this year. It has been picking up in the past few months, yet notable difficulties remain in restoring normal growth. We need to explore new highlights in consumption to spur domestic demand," Li said.