As the COVID-19 epidemic wanes, not only are China's economic and social order being gradually restored, but the economic and trade cooperation between China and Africa as well. 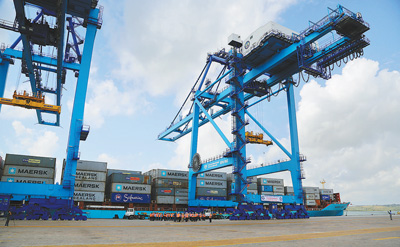 Despite the hardships during the fight against COVID-19, the China-Africa economic and trade cooperation remained stable as a whole.

According to the latest data from the General Administration of Customs, the total volume of imports and exports of goods between China and Africa from January to April of this year was 385.3 billion yuan (about 54.4 billion U.S. dollars).

The ambassador of the Republic of Rwanda to China, James Kimonio, recently participated in a live streaming activity organized by Alibaba, China's top e-commerce company, in an effort to promote Rwandan coffee, an important export crop in the country.

"I am grateful to Chinese e-commerce platforms for bringing hope to our farmers so that they can continue to participate in global trade," Kimonio said, as online orders of the coffee beans increase.

The secretary general of Alibaba Globalization Office Song Juntao, said, "Orders for commodities in Africa are rising instead of falling, which can help local farmers withstand the economic impact of the epidemic."

The accelerated resumption of work and production in China offers a boost to the economic development of countries in Africa, adding a report from Reuters that the South African Rand has rebounded recently, thanks to the growth of export to China.

Compared to the same period last year, statistics indicate that South Africa exported 12.7 million tons of iron ore to China in the first quarter of this year, up 22.2 percent, and China imported 54,741 tons of copper ore and its concentrate from the Democratic Republic of the Congo in March, an increase of more than 24 times.

The Citizen, a newspaper in Tanzania, shared in an analytical article that for many African countries, it is good news for China to take the lead in starting economic recovery, adding that China's economic recovery will bring a considerable amount of infrastructure construction and demand for resources. The article emphasized the significance this will have to African countries that rely on mineral exports.