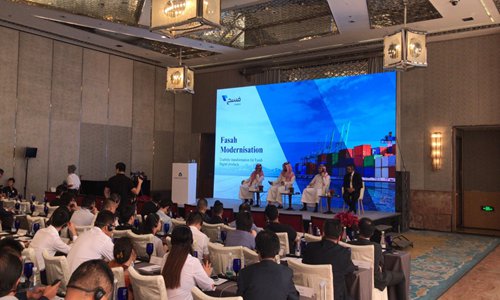 Participants and attendees at the seminar on Thursday in Shanghai. (Photo: Global Times)

Saudi Standards, Metrology and Quality Organization (SASO) organized a seminar themed "Saudi Arabia and Middle East market development" in Shanghai on Thursday. The event was aimed at helping small and medium scale enterprises to better understand the growing demand for Chinese products in the Saudi Arabian market, including the new import management regulations of Saudi Arabia.

Saudi Arabia has a great significance in China's Belt and Road initiative; besides, it is China's largest trading partner in the Middle East and West Asia, and vice-versa. According to SASO, in 2018, the trade volume between the two countries soared by 32% year-on-year, reaching $61.4 billion, which accounted for 17% of Saudi Arabia's total foreign trade during the same period.

During this seminar, domestic and foreign experts introduced the current market development strategies in the Gulf Cooperation Council (GCC) countries and Saudi Arabia. They also talked about the new standards, newest regulations and testing, and certification of exports to Saudi Arabia.

SASO has officially implemented the Saudi Product Safety Program known as SALEEM with the launch of the SABER platform for certifying exports to Saudi Arabia.

The SALEEM system aims at "establishing consumer trust" and "ensuring fair trade between buyers and sellers," which are two of Saudi Arabia's strategic goals and a vital part of the Saudi Vision 2030.