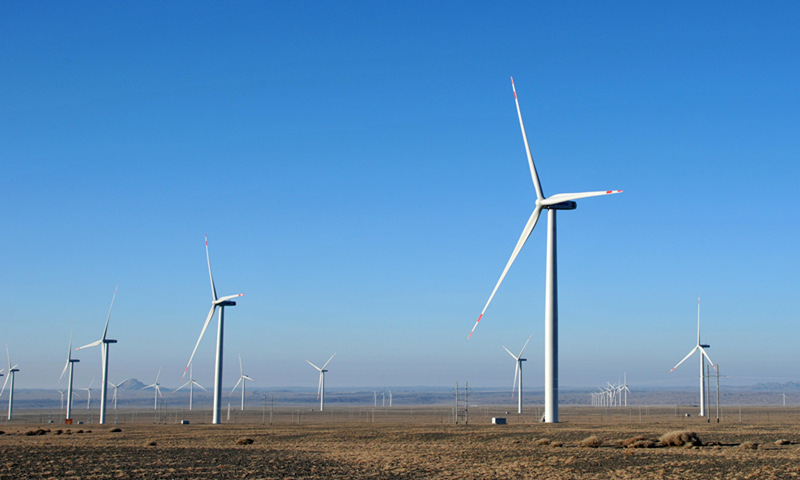 Wind turbines run smoothly in Qitai county in Northwest China's Xinjiang Uygur Autonomous Region. Bordering Mongolia and located east of the Altay Mountains, the county is known as "the hometown of wind" for its strong year-round gusts that sometimes annoy residents. With investment by wind power enterprises, the county has become a new energy base with an annual capacity of 1.7 million kilowatts. (Photo: cnsphoto)

China and Arab states, both tasked with a mission to ensure energy security while pushing for a transition toward renewables, have set their eyes on closer energy ties, notably in green sources such as solar panels, hydrogen and nuclear power, energy authorities and industry insiders said Friday at a major expo in Yinchuan, Northwest China's Ningxia Hui Autonomous Region.

The Arab League is the world's most solar energy-rich region where solar panels have an immense potential for power generation over the coming decades as the region aims to cut its reliance on carbon-based energy and shift toward clean and renewable energy, Liu Yiyang, deputy secretary general of the China Photovoltaic Industry Association, told an energy cooperation summit as part of the fifth China-Arab States Expo.

This means enormous room for cooperation between Arab countries and China, now the world's solar champion in capacity terms.

China's newly installed solar power capacity hit 37 percent of the world's total in 2020, up from 26 percent the prior year, according to industry data.

The country is expected to add 55-60 GW of installed solar power capacity in 2021, while its solar module exports are forecast to reach about 80 GW.

Chinese energy firms are seen taking advantage of their strength in capacity terms to facilitate Arab states' energy transition, Zhang Jianhua, director of the National Energy Administration (NEA), said in a speech during the expo on Thursday, citing the 950 MW solar thermal plant in Dubai, the largest of its kind in the world with the participation of Shanghai Electric.

Energy cooperation lies at the heart of the China-Arab strategic partnership, according to Zhang, reputing hydrogen energy, energy storage and smart grids to be among the areas of new-gen clean energy technologies that the two sides would cooperate on.

Arab nations are traditional energy powers whose energy mix is largely carbon-based. Their vision of having renewable energy make up the lion's share of energy consumption in decades to come suggests substantial room for cooperation in energy storage also, an indispensable part of efforts alongside renewable energy installation to eventually achieve carbon neutrality in the region, Wang Bei, general manager of the Middle East region at the Energy Storage Department at CATL, China's largest electric vehicle battery maker, said at the Friday summit on Friday.

As hydrogen energy is being eyed for the region's energy mix to be shifted toward renewables, relevant investment would be on the rise as well, industry participants said.

There would supposedly be a huge potential with hydrogen power storage and transportation in the Arab market as the rise in demand for hydrogen energy will necessitate corresponding storage and shipping facilities, Li Huaien, technical director of hydrogen technologies of CIMC ENRIC Holdings, an energy transportation and storage equipment firm, told the Global Times on Friday.

Partnership in nuclear power is also in focus. China National Nuclear Corporation has signed agreements on the peaceful use of nuclear energy with Arab nations including United Arab Emirates, Saudi Arabia, Algeria and Sudan, according to Zhang, adding that they have also reached cooperation intentions on uranium exploration, nuclear fuel supply and operation and maintenance of nuclear power plants.

"Many Arab countries have expressed their desire to include the option of electricity generation and seawater desalination with nuclear energy as part of their strategies to secure and diversify energy supply resources," Salem Hamdi, director-general of the Arab Atomic Energy Agency (AAEA), said in a speech to the Friday summit via video.

Most Arab states lack the required knowledge, skills, human resources and financial resources to build nuclear power plants for power generation and seawater desalination, and need to establish and develop the infrastructure that enables them to build these nuclear power plants, he said, considering the China-Arab cooperation in the nuclear field dating back in 2010 as a vital component of the region's nuclear vision.