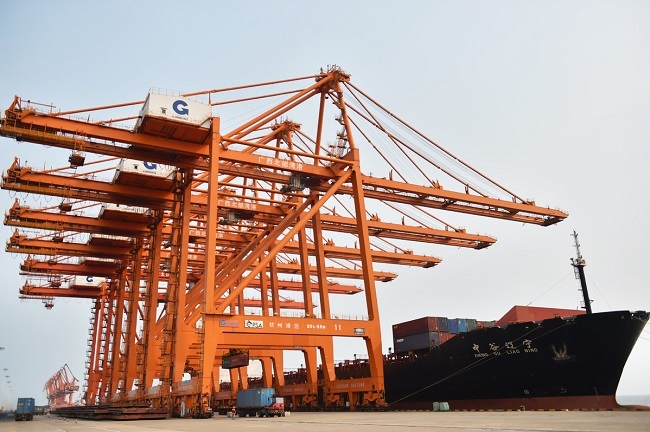 Dongxing, a border city in South China's Guangxi Zhuang autonomous region which is separated from Vietnam's Mong Cai by a narrow river, saw its wholesale market bustle with traders from ASEAN countries, a scene contrasting the impact of the coronavirus outbreak.

"I pulled off my first business deal in China nine years ago, when I saw a daily turnover of less than $100. Now online and offline transactions on a peak day can bring the total to over $400," said Pham Van Tan, a 31-year-old Vietnamese, who frequents the international wholesale market in Dongxing, also a seaport.

China's trade with the ASEAN stood at 2.51 trillion yuan ($362 billion) in the first seven months, up 6.6 percent year-on-year, data from the General Administration of Customs showed.

By the first half of this year, Guangxi's Beibu Gulf Port had a network of 27 foreign trade routes to major ports of ASEAN countries.

The port saw its cargo throughput increase by 17.85 percent year-on-year to nearly 153 million tons in the first seven months, according to the Beibu Gulf Port Group. Meanwhile, it handled about 2.75 million twenty-foot equivalent units during the period, up 29.71 percent year-on-year.

Also, the land-sea freight route saw a total of 1,691 trains departing Guangxi in the first half, up 66 percent year-on-year.

"Through our port, the land-sea freight volume from Chongqing, Yunnan, Guizhou, and other western provinces has seen a sharp increase in the period," said Wei Tao, chairman of Beibu Gulf Port Group.

Since the establishment of the China-ASEAN Free Trade Area (CAFTA) in 2010, the trade in goods and services between China and ASEAN countries has grown rapidly through the deep integration of industrial chains and value chains.

Tariffs on 7,000 products have been canceled under the framework of CAFTA. In 2002, the trade volume between China and ASEAN countries was only $54.8 billion. In 2019, it exceeded $600 billion, according to data from the Ministry of Commerce.

Xu Liping, a researcher with the Chinese Academy of Social Sciences, said that the economies of China and ASEAN countries are highly complementary.

The establishment of CAFTA and drastic tariff cuts have greatly improved the efficiency of the flow of production factors in the region, which inevitably led to trade growth, he said.

The China-ASEAN Information Harbor Co Ltd, a Guangxi-based info-tech company, has been dedicated to China-ASEAN digital and information industrial cooperation over the past few years.

Moreover, China and ASEAN countries have cooperated in the satellite navigation area before China's BeiDou Navigation Satellite System was officially completed for commissioning on July 31.

China has begun to provide navigation services to some ASEAN countries, and it will promote the economic and social development of ASEAN countries, especially in the fields of modern agriculture, digitalization and intelligent ports, said Ran Chengqi, director of the China Satellite Navigation Office.

Additionally, over the years, relying on each other's advantages, China-ASEAN enterprises have realized and promoted mutual complementarity and common development.

The Malaysia-China Kuantan Industrial Park in Pahang, Malaysia, is a major project under the Belt and Road Initiative.

This plant is a joint steel project that has been in operation since 2018 in the special economic zone, and is neatly designed with factory buildings, roads and green vegetation.

The annual output of the environmentally friendly project exceeds 3 million tons, and the product quality and production technology are at the leading level in Southeast Asia, according to Hu Jiulin, chief engineer of the project.

"Environmental protection-related investment accounts for nearly 20 percent of the total project investment, and it is much higher than the local average standard," he said.

Attracted by the remarkable market, many Chinese manufacturing enterprises have set up production bases in ASEAN countries.

SAIC-GM-Wuling, a major automobile manufacturer in Guangxi, put its manufacturing base in Indonesia into operation in July 2017, bringing along 16 automotive parts enterprises from China and other countries to invest in Indonesia.

Multilateral trade is still an irresistible trend. The increasingly close economic and trade relations between ASEAN countries and China remain vigorous through multilateralism and free trade, said Azlimi Zakaria, consul general of the Consulate General of Malaysia in Nanning, the capital of Guangxi.