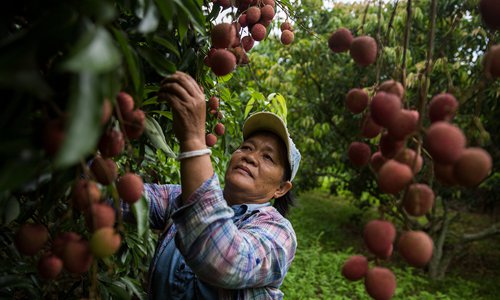 An upgraded China-ASEAN trade protocol, which fully came into force on Tuesday, will unlock more business opportunities and counter growing trade protectionism around the world, experts said.
The deal also lays a solid foundation for other regional agreements, such as the Regional Comprehensive Economic Partnership (RCEP), and serves as a boost to the slowing global economy, analysts told the Global Times on Tuesday.
The Protocol to Amend the Framework Agreement on Comprehensive Economic Cooperation and Certain Agreements thereunder between ASEAN and China (ACFTA Upgrading Protocol) was signed in 2015, with ratification work finished by all member countries as of August 22 this year. The upgraded protocol was fully effective for all members starting on Tuesday, according to a post by China's Ministry of Commerce (MOFCOM).
The upgraded version has a broader scope than the original pact, expanding areas that have not been opened up in the past, and it further facilitates trade in goods and services, as well as investment, among all countries involved, Ge Hongliang, deputy director of the College of ASEAN Studies at Guangxi University for Nationalities, told the Global Times on Tuesday.
Opportunities in both goods and services trade will be unleashed as the new protocol comes into force, said Xu Liping, director of the Center for Southeast Asian Studies of the Chinese Academy of Social Sciences.
The ACFTA Upgrading Protocol has simplified the rules of origin, customs procedures, trade facilitation measures and investment regulations. The signatories also agreed to cooperate in areas including agriculture, fisheries, forestry, information technology, tourism, transportation, intellectual property, human resources development, small and medium-sized enterprises and the environment.
The China-ASEAN Free Trade Area (FTA) effectively promoted the rapid development of bilateral economic and trade relations in recent years. In 2002, when the China-ASEAN FTA had just been launched, bilateral trade was $54.8 billion, while in 2018, bilateral trade reached $587.8 billion, an increase of nearly 11 times, according to MOFCOM data.
Two-way investment increased from $3.37 billion in 2003 to $15.8 billion in 2018, an increase of nearly five times. China is ASEAN's largest trading partner now, and ASEAN is China's second-largest trading partner.
Against unilateralism
Experts noted that expanding trade between China and ASEAN countries will also help China to further diversify and reduce its trade reliance on the US and European countries amid the protracted trade war between China and the US. In the first half of 2019, ASEAN overtook the US as China's second-largest trade partner for the first time since 1997.
"Although China-US trade friction shows signs of easing, challenges such as 'reverse globalization,' trade protectionism and unilateralism persist. China-ASEAN ties reaffirm the value of global trade and multilateral trade," Ge said.
These ties "will also prompt countries concerned to make correct choices in the context of China-US strategic competition," Ge said.
However, Xu noted that China-ASEAN trade is still limited to primary commodities such as agricultural products, as well as intermediate products that may be exported to a third destination such as the US or EU.
With strengthened technological cooperation, China and ASEAN will find room for growth in bilateral trade, Xu said.
In the China-ASEAN Strategic Partnership Vision 2030 adopted in 2018, the two sides agreed to realize a goal of $1 trillion in bilateral trade and $150 billion in investment by 2020, according to a report by the Xinhua News Agency.
Xu told the Global Times that the upgraded protocol will also accelerate the conclusion of other ongoing regional trade talks including those for the RCEP, and expand the co-development of economic cooperation in the region.
The RCEP is a 16-economy trade pact that includes ASEAN, along with China, Australia, India, Japan, South Korea and New Zealand. The agreement aims to create one of the world's largest trading blocs encompassing 45 percent of the world's population and 40 percent of global trade.