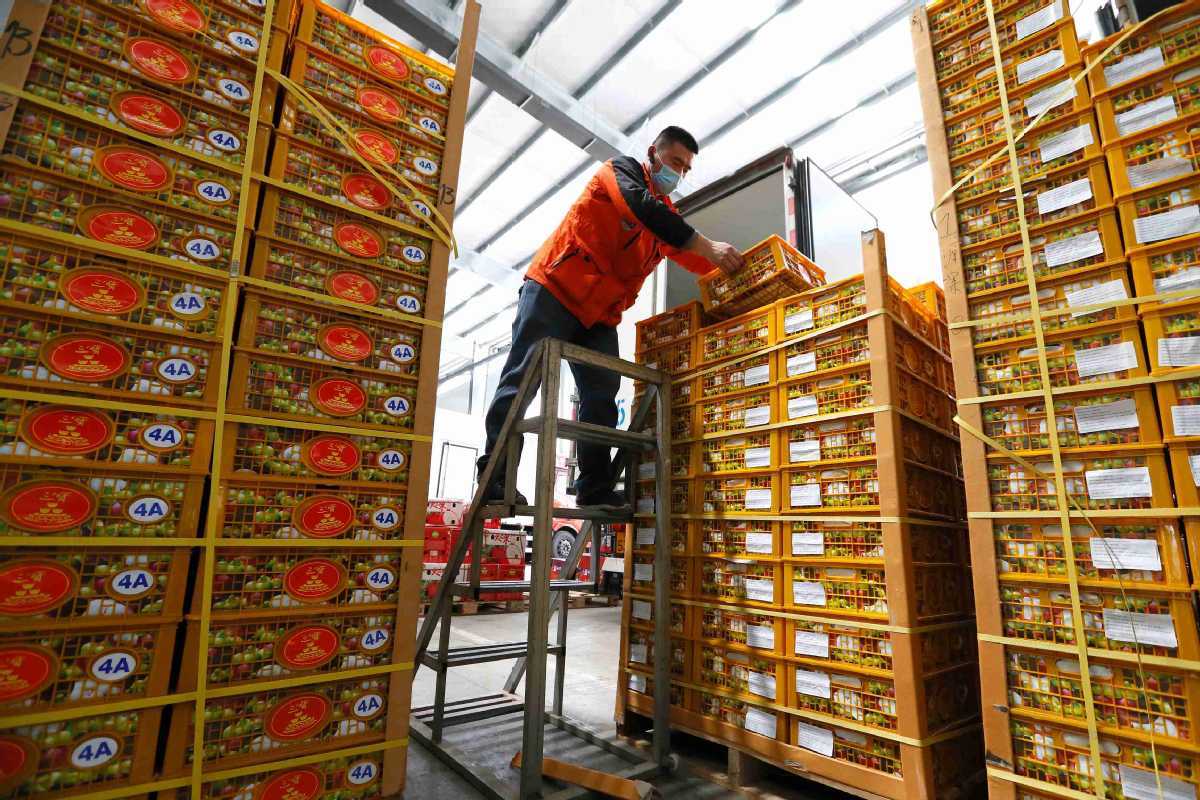 An employee at a market in Qingdao, Shandong province, stacks crates of fruit imported from Thailand. (Photo: Xinhua)

The experts' comments came after the General Administration of Customs said that the ASEAN had replaced the European Union as China's largest trading partner during the first quarter of this year. China's foreign trade with ASEAN member states rose to 991.34 billion yuan ($139.77 billion) during the first quarter, up 6.1 percent on a yearly basis, and accounting for 15.1 percent of China's total global trade volume during the period.

Apart from the United Kingdom's decision to leave the EU at the end of January and its trade volume no longer being part of the bloc's total amount with China between January and March, China's surging imports of integrated circuits from the ASEAN was another contributor for the phenomenon, said Li Kuiwen, director-general of the GAC's statistics and analysis department.

China imported 105.65 billion yuan worth of integrated circuit products including microprocessor chips, chip capacitors and analog-to-digital converters from the ASEAN markets in the first three months of this year, up 25.8 percent on a yearly basis, accounting for 23.4 percent of China's total imports from the bloc, according to Customs data.

Many Japanese and South Korean companies including Sharp Corp and Samsung Electronics Co Ltd have transferred production from other parts of the world and set up a number of integrated circuit factories in ASEAN economies such as Vietnam, Thailand and Malaysia in the past few years. Demand for such products has increased in China and the country has turned to the ASEAN to meet its demand, said Li Yong, vice-chairman of the expert committee of the Beijing-based China Association of International Trade.

Though some people believe that this reality may bring certain challenges to China's integrated circuit sector, Li said: "In the context of the epidemic outbreak, both China and ASEAN face challenges in the supply and industrial chains, which in turn strengthens both parties' willingness and motivation to boost bilateral trade."

Zhuang Rui, deputy dean of the Institute of International Economy from the University of International Business and Economics in Beijing, said it is vital for China to look for new and higher value-added growth in industrial transformation and upgrading to further enrich its ability in high-tech manufacturing and innovation of core industrial components to cut its dependence on foreign chips.

Fang Aiqing, deputy director of the economic committee of the National Committee of the Chinese People's Political Consultative Conference, said that because of the outbreak, it is too early to conclude whether ASEAN can remain China's largest trading partner for a long time.

Encouraged by the short logistics distance, complementary industrial structure and 15 Asia-Pacific countries' joint efforts and goal to conclude the RCEP by the end of this year, Fang predicted that the signing of the world's largest trade agreement will not only facilitate China and the ASEAN to further develop trade ties, but also generate momentum in investment, tourism, public emergency response and regional connectivity areas.

Eager to minimize the COVID-19 impact on economic growth and vulnerable developing countries, trade ministers of the Asia-Pacific Economic Cooperation jointly released a statement on Tuesday to reaffirm the utmost importance of collaboration at all levels and across the region to hasten their fight against the epidemic and commit to work closely to defeat the virus with urgency.

The trade ministers will ensure that trading links remain open and explore ways to facilitate essential movement of people across borders, without undermining the efforts to prevent the spread of the virus, and work closely to identify and resolve any unnecessary barriers to trade, the Ministry of Commerce said in a statement on Tuesday.

Top APEC trade officials also recognized the importance of keeping their markets open and working together to deliver a free, fair, nondiscriminatory, transparent, predictable and stable trade and investment environment, to ensure that trade and investment continue to flow in these trying times.