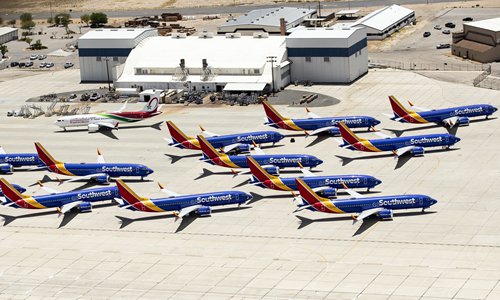 Several months after the second Boeing 737 Max crash in March, a report by a panel of international air safety regulators harshly criticized the US Federal Aviation Administration's (FAA) review of a safety system on the 737 Max jet. The lack of a unified top-down evaluation of the system made it difficult to assess whether compliance was fully demonstrated, the report said.

Now isn't the right time for China to resume purchases of Boeing's 737 Max jet due to potential safety risks. We advise the FAA to work out its certification procedures involving the plane and promote information disclosure.

The more conscientious the FAA is on issues related to Boeing, the sooner China will resume its purchases of 737 Max jets.

The loss of reputation has made it increasingly urgent for Boeing to find a reputable supporter for its 737 Max jet in a bid to win back public trust, and a British buyer is a good choice that can create a positive demonstration effect for persuading other European companies to resume purchases.

China needs to make its decision independently. If there isn't a 100 percent guarantee that the 737 Max jet is safe, then none should be purchased by Chinese enterprises. Many expect that the Boeing 737 Max won't resume flying in the US before 2020. There is every reason to believe that the time is not yet ripe for resuming purchases of Boeing's 737 Max.

China was the first country to ground the 737 Max in the aftermath of the Ethiopian Airlines crash. The report by air safety regulators added to the evidence that China's move was the only right one.

China, which has the world's second-largest civil aviation market, is not prejudiced against Boeing. The country is willing to do business with Boeing and purchase other types of Boeing aircraft.

The company is likely to be a beneficiary of trade talks between China and the US, if the two countries end their trade war and eliminate additional tariffs. Boeing's aircraft still have a chance to be included in a possible list of US products that China is willing to purchase if the two countries cement a trade deal.

When will China resume purchases of Boeing's 737 Max jet? It seems more effort is needed by the FAA to scrutinize software changes from Boeing. The report has found that Boeing's so-called MCAS anti-stall system was not evaluated as a complete and integrated function in the certification documents that were submitted to the FAA. If the US hopes that China will resume purchases of Boeing's 737 Max, it should solve the problems of the FAA first.