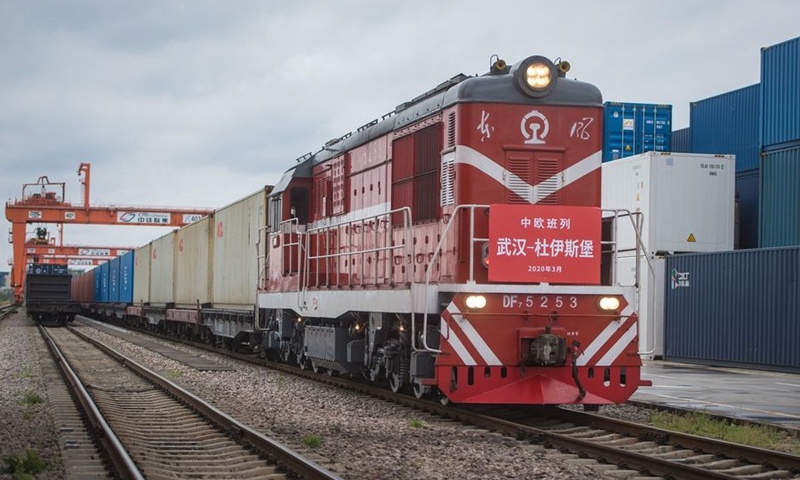 As the coronavirus battered world economies, China in the second quarter surpassed the US and became Germany's largest export market for the first time, illuminating the prospects for trade and investment cooperation between the world's second-largest economy and the largest one in Europe.

From April to June, China imported goods worth nearly 23 billion euros ($27.25 billion) from Germany, replacing the US market which had been the biggest buyer of German goods for many years, the German Federal Statistical Office said.

German media gave credit to China's fast containment of the coronavirus that has helped China's economy to rapidly recover.

Indeed, Central China's Hubei Province, the one hit hardest by the coronavirus in China, on Saturday sent 618.6 tons of medical supplies, fiber optic cable, non-woven products and cross-border e-commerce products to Duisburg in Germany via the China-EU freight train. As it recovers from the virus outbreak, the province has started to explore the Europe market through the China-EU freight service for the first time.

Wang Yiwei, director of the Institute of International Affairs at Renmin University of China in Beijing, said another factor was China's digital-driven economic upgrading during the pandemic, while Germany is trying to realize a digital revolution of its own.

The comparative advantages of China and Germany, as well as their status and the appeal of the division of labor during the globalization process, are bringing the two giant economies closer, Wang told the Global Times.

As supporters of globalization, China and Germany coordinated the first chartered flight of foreign nationals from Europe, bringing about 200 German businessmen and their family members back to workplaces in China as early as May. At that time, the coronavirus continued to wreak havoc in Europe and elsewhere.

Also in May, the construction of a $10-billion integrated petrochemicals project under German chemical giant BASF in Zhanjiang, South China's Guangdong moved into pile driving. A company official said he was confident of launching the first batch of "Made-in-Zhanjiang" products by 2022, the Xinhua News Agency reported.

For years, Germany has been a leader in China-EU cooperation due to its economic and technology power, according to Wang. "Its leadership in the EU bloc will be strengthened in the post-Brexit age."

Moreover, as Germany took over the six-month presidency of the Council of the EU on July 1, Chinese experts agreed the country will play a decisive role in driving the final agreement of the China-EU bilateral investment treaty (BIT), though divergences remain on issues of market access, labor protection and digital data security.

Zheng Chunrong, a professor of German Studies at Tongji University in Shanghai, told the Global Times the much-anticipated China-Germany-EU leaders' summit scheduled for Monday may map out plans for broader cooperation until 2025.

For instance, an mRNA vaccine against the coronavirus co-developed by Chinese pharmaceutical company Fosun Pharma and the German vaccine producer BioNTech has entered late-stage clinical trials, and will likely be available for mass use this winter, Hui Aimin, vice president of Fosun, told the Global Times on Saturday.

As New York Times opinion columnist Thomas Friedman wrote, "As Berlin goes, so goes Germany, and as Germany goes, so goes the EU, the world's biggest single market. And whichever country - the United States or China - is able to leverage the EU on its side in the competition for whose technology standards, trade rules and technology will prevail and set the rules for global digital commerce in the 21st century."

In 2019, bilateral trade between China and Germany hit 205.7 billion euros, the Xinhua News Agency reported. China has remained Germany's most important trading partner for four consecutive years, and is of particular importance to the country's machinery, auto and chemical engineering sectors.