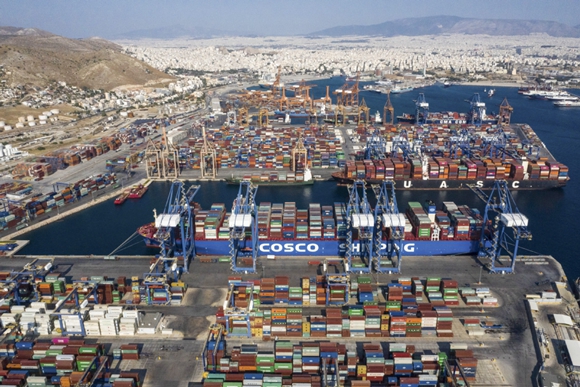 Despite the economic shock brought by the COVID-19 lockdowns, Greece's largest harbor Piraeus Port still recorded annual growth in the first four months of the year, the tenth year since China's COSCO Shipping officially took control of its management.

The port's constant growth is mainly thanks to the major support from its parent company and the trade buoyed by the resumption of work and production in China, "which clearly benefits PPA (Piraeus Port Authority)," spokesman Nektarios Demenopoulos told Xinhua recently.

China's role as a global producer and supply chain heavyweight has been reflected in many examples like the Piraeus Port, representing win-win cooperation under the Belt and Road Initiative (BRI).

Stable industrial and supply chains, high-quality joint pursuit of BRI projects and a more advanced opening up of China's economy were highlighted by Chinese Premier Li Keqiang during the country's annual national legislative session, factors which experts worldwide have called "necessary" for the recovery of the world economy.

China has emerged as the central player in global supply chains over the past two decades. As the COVID-19 pandemic impacts the world economy, voices have risen calling for diversifying supply chains away from China, while experts and entrepreneurs admit China's irreplaceable role with its big advantages in manufacturing and logistics.

A recent survey by the American Chamber of Commerce in China and PricewaterhouseCoopers (PwC) showed that almost 70 percent of US companies say they have no plan to relocate production outside of China due to COVID-19.

"We are very confident in the Chinese market. We will make another successful year with partners in China," Jean-Paul Agon, chairman and CEO of L'Oreal Group, has told Xinhua recently.

"China will continue to be the world's factory because nothing else comes even close," said Peter Sand, chief shipping analyst at industry trade body BIMCO, in a story by Wall Street Journal on May 1, citing China's "massive logistics ecosystem" as an indispensable advantage.

Tang Jin, senior research analyst at Japan's Mizuho Bank, also said in an article on The Nihon Keizai Shimbun that Japanese companies have become a significant part of the Chinese supply chain with their dependence on the huge Chinese market.

The gradual resumption of work in China has witnessed more diverse goods transported by freight under the operation of China Railway Express, from China's manufacturing hubs to cities in Europe and Central Asia, including daily necessities, electrical products, industrial machinery, metals, medical supplies and food.

From March 21 to the end of April, anti-pandemic supplies totaling 660,000 items and weighing 3,142 tonnes were sent by the freight trains to European countries such as Italy, Germany, Spain and the Czech Republic, according to China State Railway Group.

The German Mechanical Engineering Industry Association (VDMA) found in a recent survey that many mechanical engineering companies in the country reported a slight easing of tension on the supply side, in particular from China.

Oliver Wack, an expert at the association's department of foreign trade, told Xinhua that the easing is not only related to the restart of production in China, but also to the improvement of the logistics chains from and to China.

Recently, a new large-scale hydropower project was signed in Bosnia and Herzegovina under the Belt and Road framework, which will effectively improve the region's power supply and drive local economic development.

In Egypt, the COVID-19 pandemic has had limited impact on BRI projects, including the construction of the Central Business District in the country's New Administrative Capital region east of Cairo, said Egypt's Housing Ministry spokesman Amro Khatab.

Turning the new capital into a regional hub for business and management, the project not only continues on schedule but also guarantees the safety of both Egyptian and Chinese workers by implementing anti-pandemic measures.

In spite of the COVID-19 crisis, Chinese investment in Belt and Road countries and regions increased by 11.7 percent year on year in the first quarter of 2020, along with a 3.2-percent growth in trade.

Premier Li said in his government work report released during China's "two sessions" that the BRI would uphold market principles and international rules, give enterprises a leading role, lead to mutually beneficial outcomes, and boost outbound investment from China.

Pierre Picquart, French expert on China at the University of Paris VIII, said that the "two sessions" sent positive signals for an economic recovery. The innovative stimulus package in China as well as the BRI will promote financial flows and economic growth around the world.

"With its economic recovery, China will restore confidence to business leaders, investors and consumers in the world," he added.

China will further enhance cooperation with the rest of the world and introduce more measures to expand its opening up policy, Premier Li said Thursday.

With a population of over 1.4 billion people and a middle class of over 400 million, Chinese consumption is the growth engine of both China and the world, as Jim O'Neill, chair of the London-based think tank Chatham House, has said.

As the pandemic forced national lockdowns and dampened trade, worries about a more inward and less open world have emerged. Still, experts see positive signs in China's stance against protectionism and efforts to deepen opening-up.

China can offset headwinds to global trade to some degree by pursuing its policy of reform and opening up more aggressively, said Martin Wolf, chief economics commentator for the Financial Times. "That will help China and the rest of the world."

Vasilis Trigkas, research fellow at the Belt and Road Strategy Institute of China's Tsinghua University told Xinhua that China's shift towards higher consumption domestically will obviously "have a positive impact to the global economy as nations would increase their exports to the vast Chinese market."

Several Japanese companies in the eastern city of Xiamen understand their future is tied to growing Chinese consumption.

Zhao Fujun, general manager of Yamaha motors' global research and development center in Xiamen, said that his company pins high hopes on the Chinese market since China has taken efficient measures to stem the spread of COVID-19. The company's investment in China will increase by 30 percent this year.

Christine Bierre, editor-in-chief of France's Nouvelle Solidarite magazine and an expert at Schiller France Institute, told Xinhua: "This is China's main contribution to ... the world: by developing itself, and its huge market, it drives the world economy forward."