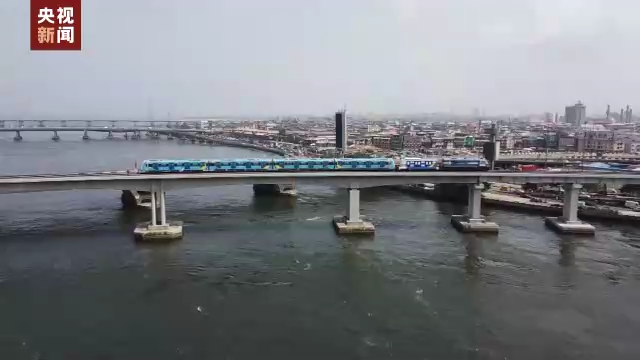 Undertaken by the China Civil Engineering Construction Corporation (CCECC) in 2010, the first phase of the 27-kilometer-long electric-powered light rail project stretches 13 kilometers, with five stations, and is expected to carry over 250,000 passengers daily when in full operation.

The LRMT Blue Line project is the first rail infrastructure traversing Okokomaiko, a densely populated area in western Lagos, the economic center of Nigeria with a population of over 20 million, and Marina, a business district on Lagos Island.

Nigerian President Buhari, along with senior Nigerian and Chinese officials and representatives, attended a ceremony on Tuesday to inaugurate the official operation. Buhari tried the light rail and spoke highly of it as "safe, convenient and comfortable."

The construction of the second phase of the Blue Line rail project, which stretches 14 kilometers, was launched immediately after the phase-I inauguration during the ceremony.

Declaring the completion of construction on the Blue Line project at a ceremony on December 21, 2022, Babajide Olusola Sanwo-Olu, governor of Lagos, described the moment as "historic," saying Lagos became the first sub-national government in West Africa to fund and deliver a rail system from the state's balance sheet.

Sanwo-Olu said the milestone was a culmination of "impactful reforms" initiated in the state's transport ecosystem.

"Today, we are making history with the completion of the historic rail line, which is the first phase of the Blue Line," Sanwo-Olu said. "Now, we have put the challenges behind us; from now on, we will focus on the benefits of this project for our people."

More than 2,000 Chinese and local employees worked together to optimize the construction even in the face of multiple challenges, such as complicated geology and the COVID-19 pandemic, according to Chu Maoming, China's consul general in Lagos.

Huge infrastructure projects like the railway construction would continue to energize the Nigerian economy and promote speedy development, Chu said.

Speaking at the event, Zhang Zhichen, chairman of CCECC Nigeria Limited, said the Chinese firm will continue to maintain the enterprise spirit of "diligence, integrity, and tenacity" while building the follow-up projects with high quality and efficiency.