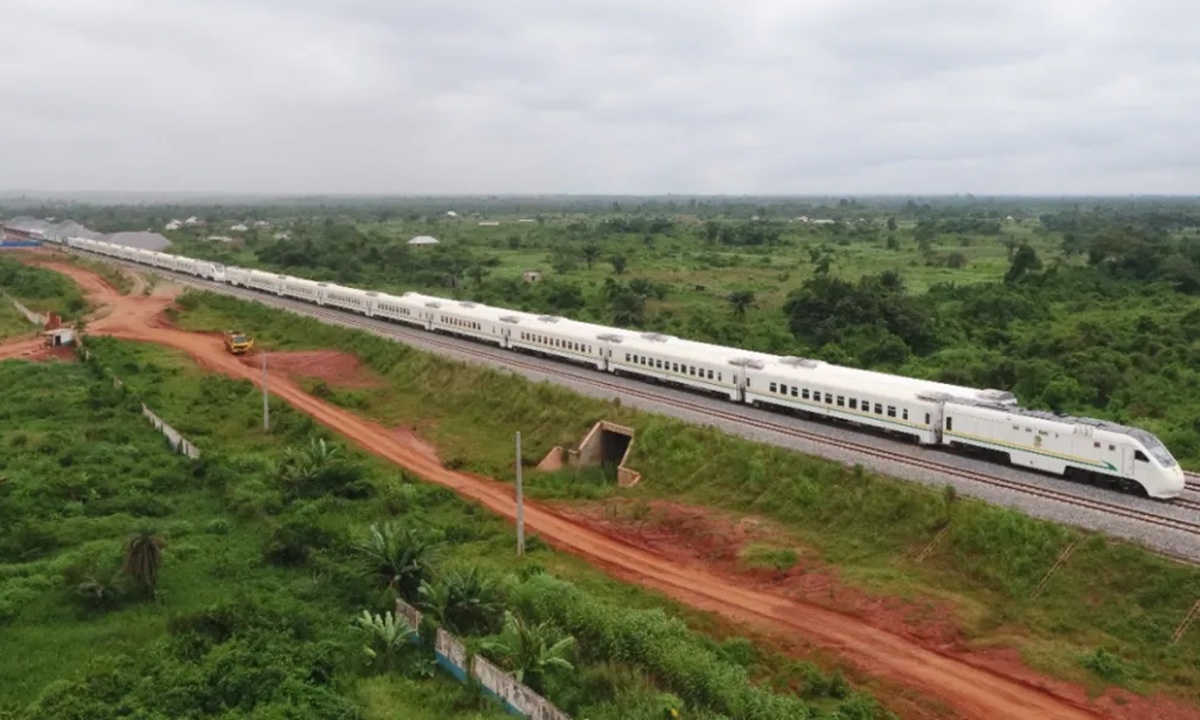 A railway project connecting Nigeria's city of Lagos, Africa's largest city, to the country's industrial base Ibadan, has been officially put into service on Thursday, making it the first modern double-track standard railway in the West Africa region.

The railway, stretching about 157 kilometers (km) with a speed of 150 km/h, marks a landmark cooperation project between China and Africa under the Belt and Road Initiative (BRI) that will significantly improve Nigeria's infrastructure and boost its economic development.

The project is designed, built and undertaken by China Civil Engineering Construction Corporation (CCECC). The Export-Import Bank of China provided the funds.

Jiang Yigao, general manager assistant of CCECC and executive director of CCECC's Nigeria Co, told the Global Times on Thursday that it only took about three years for the project to be completed, which set a record for the fattest construction speed of Chinese enterprises' rail project in West Africa.

An inauguration ceremony for the construction was held in March 2017. In March 2020, construction of the main line of the Lagos-Ibadan section was completed, and a trial run was conducted on December 2020. In January, a branch connecting the main section with Apapa port in Lagos - also Nigeria's largest port city - was completed.

According to Jiang, Chinese and Nigerian workers have worked together, dealing with a complex environment, lack of materials, and the sudden outbreak of the COVID-19 pandemic, for Nigeria to realize its modern railway dream.

"We have overcome a lot of technological barriers during the construction, and we also communicated with Italian consulting firms to convince them using modern railway standards," Jiang said, adding that thanks to effective epidemic-prevention measures and abundant supply of medical gear, the project was only suspended for a very short time.

Liu Zhengqiang, vice general manager of CCECC Fuzhou Survey and Design institute, told the Global Times on Thursday that the Chinese design team in Nigeria has been running in full swing to address technological barriers, especially in downtown Lagos.

"We have to lay five rail track lines within the corridor with width of merely 30 meters. Also, plenty of underground utilities were involved, posing barriers to construction. In addition, the insufficient clearance of existing highway-over-railway and the complex existing municipal drainage system also restricted the plan," Liu said, noting that through multiple communications and repeated study with the client, consultants and property owners for more than a year, the design was finalized.

The project will bring enormous economic benefits to Nigeria, injecting a new vitality to its transportation and economic development, observers said.

According to Jiang, the project hired more than 10,000 locals at its peak, and has directly created more than 4,000 local jobs. The Chinese company also trains locals in order to transfer the operation to them in the future.

"Lagos-Ibadan railway construction will leverage the radiation effect of the Lagos in the North of Nigeria, promoting the coordinated development of regional economy," Liu said, adding that the project could also further drive the resource exploration of areas along the railway, and facilitate the process of industrialization and urbanization.