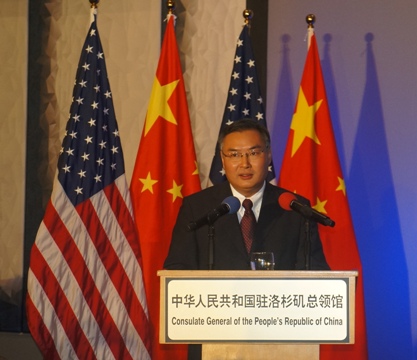 The forum will be held on June 5 at the Millennium Biltmore Hotel in downtown Los Angeles. As a signature event under the framework of the China Provinces and US California Joint Working Group on Trade and Investment Cooperation, the forum is aimed at boosting two-way trade and investment cooperation.

More than 70 companies from eight Chinese provinces and municipalities will participate in the forum, which will focus on topics including clean energy, cross-border e-commerce, investment, manufacturing and innovation, Zhang said at a press briefing on Wednesday.

The forum serves as a great opportunity for participants to look at China-US trade relations and explore further cooperation, he said.

According to Zhang, this year's annual forum will make China's Guangdong Province the Guest Province of Honor. The Guangdong delegation, led by a vice governor, will highlight business opportunities in the newly established Guangdong-Hong Kong-Macao Greater Bay Area.

"Under the current circumstances, it is even more important to enhance dialogues between our business community, and also to take a long-term approach to engage in cooperation," Zhang said.

China has become California's largest trading partner and third largest export destination for goods. Among US states, California has attracted the most Chinese investment and tourists and has the biggest number of international students from China.

Last year, a total of 1.1 million Chinese tourists visited Los Angeles County. About 50,000 Chinese students are studying in universities throughout southern California, according to Zhang.