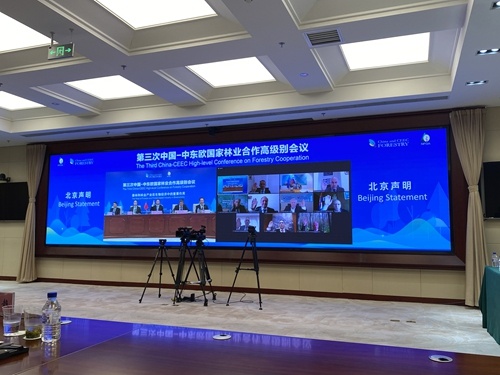 The joint statement was signed at the third China-CEEC high-legel conference on forestry cooperation held on Wednesday via video link. (Photo: Global Times)

Despite recent tensions after Lithuania quit the China and Central and Eastern Europe Countries (China-CEEC) cooperation mechanism, China and the CEEC agreed to join hands on development of the forestry bio-economy in a joint statement signed on Wednesday. Experts said the move reflects the common willingness and pragmatic need to deepen cooperation between both sides.

The statement was signed at the third China-CEEC high-level conference on forestry cooperation held on Wednesday via video link. Representatives from 16 countries including China, Slovakia, Slovenia and Greece, as well as Austria and the EU as observing members, attended.

The statement outlined future areas of cooperation in the field of forestry bio-economy, and called for the promotion of joint research and studies, as well as forest-related trade and investment among members, stating that the partnership “is of great significance for achieving the climate objectives of the Paris Agreement and the Sustainable Development Goals (SDGs) of the UN 2030 Agenda.”

Cui Zhimin, counselor of the Chinese Ministry of Foreign Affairs, said at the meeting that since the China-CEEC cooperation mechanism was jointly launched in 2012 by China and 16 CEEC countries, trade volume between the two sides has increased by nearly 85 percent.

Bilateral tourism has also surged fourfold, and a number of flagship projects between China and the CEEC have been carried out smoothly, such as Piraeus Harbour in Greece, and the Belgrade-Budapest railway, the Global Times learned.

Forest product trade has also increased significantly over the years, as the total volume almost doubled from $1.37 billion to $2.4 billion from 2016 to 2019, with an average annual growth rate of 20.5 percent.

Yang Chao, chief economist at China’s National Forestry and Grassland Administration, noted that such rapid growth has shown the complementary advantages of each party, combining the rich forest resources of the CEEC backed by the EU market and industrial advantages in China, where complete industrial chains and the need for capital and technology can be met.

As for recent discordant voices in China-CEEC relations, Cui said that other European members will not follow suit, as their cooperation with China is built on the basis of mutual willingness and pragmatic needs, and the deepening of ties will be the major trend that will not be affected by recent frictions. “We should not overestimate the influence from some particular countries that hold different opinions toward China.”

Cui added that CEEC cooperation with China will also be conducive to the balanced development of Europe, and will accelerate the process of European integration.

During the weekend meeting with several European ministers in Guiyang, capital of Southwest China's Guizhou Province, Chinese State Councilor and Foreign Minister Wang Yi said that China-CEEC cooperation focuses on pragmatic economic and trade ties, which does not involve the field of defense and security, has no geostrategic intentions, and has no intention of engaging in any sphere of influence.