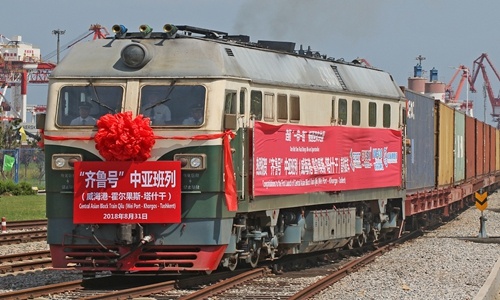 The meter-gauge railway between Kaiyuan, Southwest China's Yunnan Province to Haiphong, Vietnam witnessed 3,003 China-Central Asia freight trains as of Sunday, announced China Rail on Tuesday, which boosted the communication between China and countries in South Asia and Southeast Asia as well as the country's foreign trade volume despite COVID-19 pandemic.

The railway, which had been suspended operation temporarily during COVID-19 pandemic in 2020, has quickly resumed services and boosted bilateral cooperation. It facilitated the import of 606,000 tons of sulphur and export of 568,000 chemical fertilizer, and transported nearly 1.2 million tons cargo in total by the end of May.

Meter-gauge China-Central Asia railway was officially put into use in December 2017 under the cooperation framework between Chinese and Vietnamese government departments and enterprises. The railway extends toward north from Haiphong of Vietnam and connects Kunming, the provincial capital of Yunnan Province, which is the fastest and easiest channel access to the sea for Southwest China's provinces.