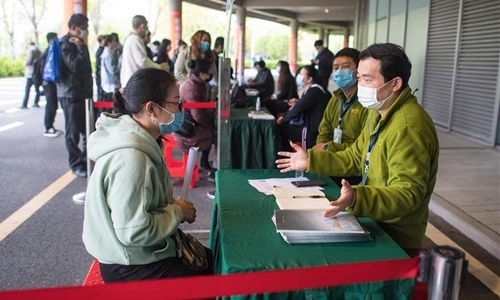 A staff member from a company communicates with a job applicant at an on-site job fair in Wuhan, central China's Hubei Province, April 21, 2020. An on-site job fair was held in Wuhan with strict epidemic prevention measures. (Photo: Xinhua)

China has already met 99.8 percent of this year's target to create 9 million urban jobs in the first 9 months of 2020, a Chinese official has said on Monday, describing the country's job market as "stable."

In the first three quarters, about 8.98 million new urban jobs were created, nearly fulfilling the yearly goal, according to the latest data released by the National Bureau of Statistics (NBS) Monday.

Thanks to favorable tax policies and fee reductions for enterprises, the resulting security of China's job market is remarkable, Cong Yi, a professor at the Tianjin University of Finance and Economics, told the Global Times on Monday. "China's urban unemployment rate remains one of the lowest among major economies around the world," he added.

Though the NBS did not reveal which sector created the majority of jobs in recent months, job hunting platforms revealed that internet, real estate, entertainment and tourism-related industries have seen an increase in job postings and received resumes.

According to a third quarter recruitment report by job-hunting platform Zhilian Zhaopin sent to the Global Times, as China has contained the virus, the recreation, hotel, catering and tourism-related service industries have gradually resumed operations, providing more jobs in the third quarter.

Monday's newly released statistics echoed this fact, as retail sales in September rose 3.3 percent year-on-year, causing the number in the third quarter to bounce back into positive territory.

In addition, Zhilian Zhaopin said those working in the foreign trade industry have enjoyed the biggest salary increase in the third quarter.

On recruitment platform Liepin, the number of new jobs posted from July to September only decreased by 3.07 percent compared to the previous year, with calls for top talent only dropping 0.14 percent year-on-year.

In particular, the number of new job posts in the internet industry, which supports China's digital economy upgrade, accounted for 25.99 percent in the third quarter among all industries, while real estate accounted for 14.05 percent and consumer goods 11.02 percent, according to the platform.

"Overall, the statistics showed that China's job market in the third quarter has recovered to a level close to last year's, which demonstrates a vibrant market," the company told the Global Times. 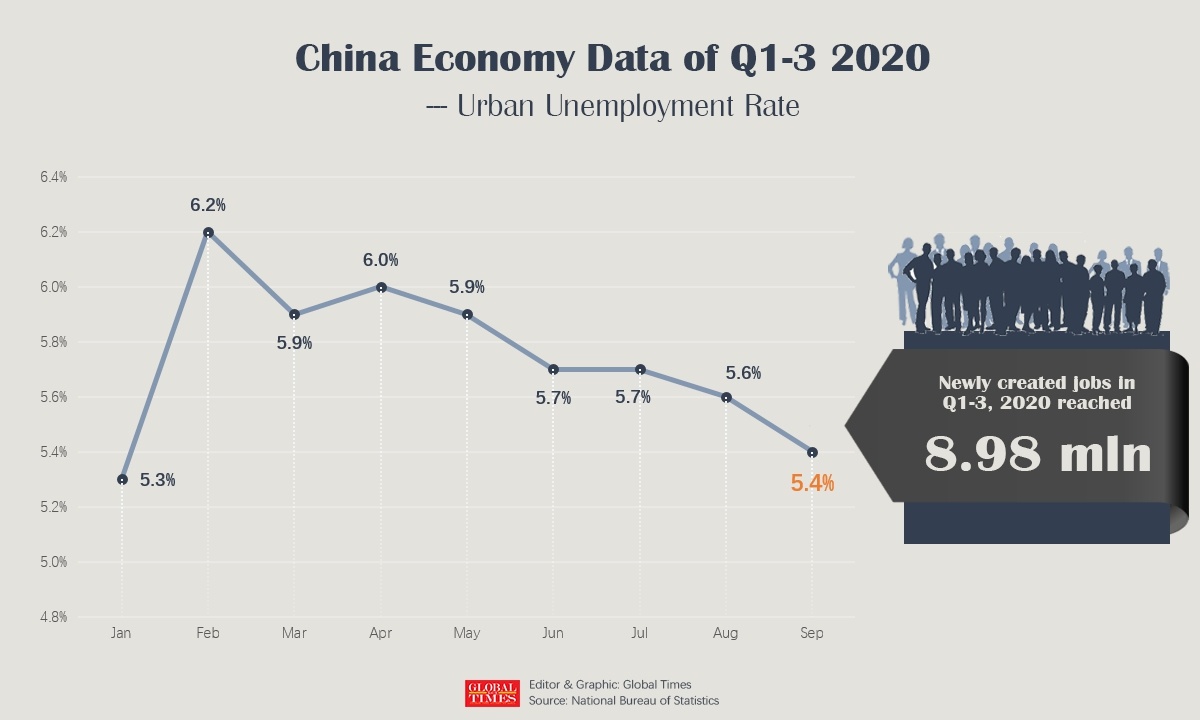 Responding to the employment of migrant workers, who had to stay at home during the coronavirus outbreak as factories shut and towns locked down, Liu said their job status is improving.

Another group suffering from the coronavirus' impact on jobs this year are college graduates, after many enterprises in the service sector paused recruitment. As a consequence, the country's 8.74 million graduates have felt unprecedented employment pressure.

A spokesperson cited NBS's monitoring data to highlight the fact that the pressure on college graduates had lightened a little in September, "thanks to positive employment trends."

"Moving into September, the graduation season has passed and the employment situation of graduates has improved remarkably," Liu noted, adding that the surveyed unemployment rate among 20-24 years old with college degrees and above had decreased by 2.4 percentage points month-on-month, but was still four percentage points higher than last year.

She underscored that the burden on the job market still remains severe, and forceful policies should be implemented to secure market entities and improve employment of key groups.