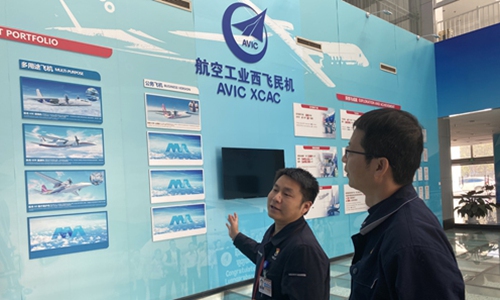 The China-developed MA700 turboprop regional aircraft, which is expected to conduct its maiden flight next year, has received 285 intended orders from countries including Cambodia, South Africa, and Pakistan, according to its developer.

The aircraft is being developed by AVIC XAC Commercial Aircraft Company in Xi'an, Northwest China's Shaanxi Province. The MA700 is a new generation of high-speed turboprop regional aircraft and the third member of the company's regional airplane family which includes the MA60 and MA600.

It is designed to operate in complex flight environments including high-altitude plateaus, high temperatures, and short runway conditions, Zang Pengbo, an official with the company told the Global Times.

It can reach a maximum cruise speed of 637 kilometers per hour and a range of 800 kilometers. It has a passenger capacity of 86. So far, 11 clients from home and abroad have signed 285 intended orders for the MA700, Zang said.

He said that MA700's is expected to capture more than 20 percent of the global turboprop regional aircraft market share by 2026. The aircraft is now under production.

During the development of the aircraft, the company also brought in foreign talents to provide a solution to engineering design, marketing, and program management challenges. As of November, the company had hired 120 foreign experts with rich experience and management skills, according to the company.

Foreign engineers with the company told the Global Times they were attracted to work for the company because China is developing innovative new aircraft, and Xi'an is the cradle of China's civil aviation industry.