China on Sunday dismissed US claims that Beijing is to blame for its trade deficit, saying that the US has overstated the trade deficit with China and that US restrictions on certain exports to China have contributed to the deficit. 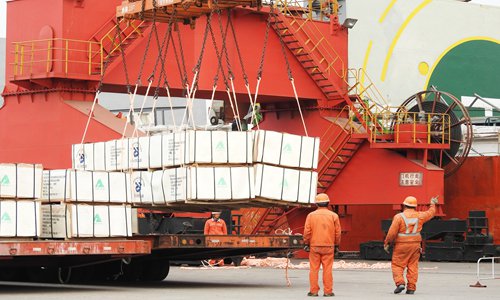 At a press conference on the sidelines of the ongoing two sessions in Beijing, Minister of Commerce Zhong Shan also warned that a trade war between the world's two largest economies could be disastrous for the US and China as well as for global trade. But he said that while China does not initiate trade wars, it can face the challenge and defend its interests.

"There is no winner in a trade war. It would only bring disaster for the Chinese and US economies as well as the world economy," Zhong said. "China does not wish for a trade war, and nor will it initiate one. But we are able to face any challenge and will firmly defend our country's and the people's interests."

Zhong is the latest Chinese official to warn against a potential trade war and criticize US protectionism after US President Donald Trump formally slapped punitive tariffs on steel and aluminum imports, including those from China, while continuing to call on China to solve the trade deficit problem.

Zhong did not discuss countermeasures against the US tariffs on Sunday, but he challenged US officials' trade deficit argument against China.

"There are discrepancies in the trade statistics between China and the US… the official US statistics overstate the trade deficit each year by around 20 percent," Zhong said, citing research by a joint team studying the discrepancies.

Chen Fengying, a research fellow at the China Institute of Contemporary International Relations, said that the current US methods for measuring trade are outdated and do not offer an accurate picture.

"They only focus on the country of origin for imports. Some of these goods exported to the US were simply assembled here but the design and other inputs came from somewhere else," Chen told the Global Times on Sunday.

The statistics also overlook the value added in the goods, according to Bai Ming, a research fellow at the Chinese Academy of International Trade and Economic Cooperation in Beijing.

The Chinese Commerce Minister on Sunday also suggested that certain US government export policies have also contributed to the trade deficit.

"The trade imbalance between China and the US is also related to the US' controls on high-tech exports to China," Zhong said.

He added that if the US were to loosen the restrictions, it could reduce the deficit by 35 percent, citing a study by a US research institution.

The US government keeps tight controls on exports of certain items, including products that can be used for both military and civilian purposes.

Li Bin, a senior fellow at the Carnegie Endowment for International Peace, a Washington-based think tank, wrote in April 2017 that based on average data from 2004 to 2009, if the US were to make its export barriers against China equivalent to those against France, the US trade deficit with China could be cut by as much as 33.74 percent.

"Our analysis shows that a significant amount of potential US exports to China were blocked by political barriers from 2004 to 2009. The situation continues today. The Trump administration needs to understand these realities in its review of trade relations with China," Li wrote.

Bai noted that China has been actively looking for ways to solve the trade imbalance. "But it seems impossible because the things we want to buy like high-tech products, the US doesn't want to sell to us."