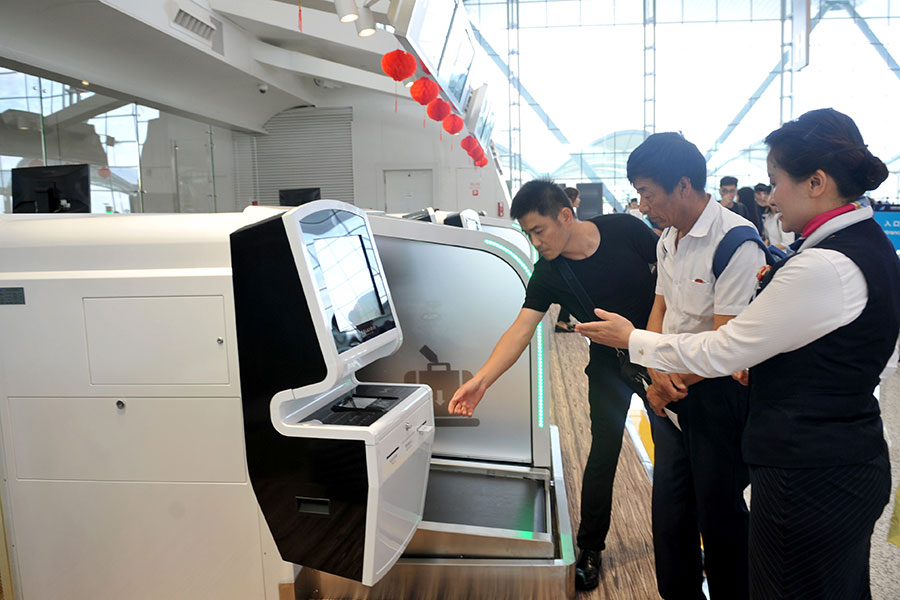 Over the next three years, real-time baggage tracking will become a common feature for passengers to identify where their luggage is by checking the status on their mobile phones.

China Eastern Airlines said it has proposed that off-airport check-in and bag services be introduced at Beijing Daxing International Airport, and related equipment is expected to be built at several places such as metro stations in Beijing as part of its long-term planning.

The new gigantic airport located in southern Beijing is scheduled to start commercial operations on Sept 30. China Eastern and China Southern Airlines have confirmed that they will move to the new hub, and more than 50 other domestic and foreign carriers have shown interest in operating flights there.

"China Eastern has been in touch with the Daxing airport about building remote check-in services when we confirmed moving there. According to the design of the new airport, remote check-in facilities will be set up at the connecting level of metro stations and terminals, and will start operations once the airport opens. Remote luggage drop services will be launched at a later stage," said Yao Yun, deputy general manager of the global baggage control center at China Eastern Airlines.

"We have been aiming to develop more services that will make travel more convenient. Remote luggage drop is expected to be gradually realized on the Chinese mainland, supported by more advanced technologies and comprehensive safety supervision measures," he said.

China Eastern said three major State-owned airlines all had some positive experiences in off-airport bag drops. In 2011, China Eastern tried out pilot services of remote check-in and luggage drop at its city terminal located near Jing'an Temple in downtown Shanghai, but later suspended the services.

The company said it would further test off-airport bag-drop services starting from domestic flights, but there are many limitations for international flights.

Meanwhile, China Eastern started pilot services of luggage tracking for some of its domestic flights, and passengers can check the location and status of their checked suitcases through a mini program on WeChat. The carrier said in the coming years, it would put more effort into building an advanced luggage tracking system.

Over the next three years, real-time baggage tracking will become a new and common feature for passengers to identify where their bags are by checking the status on their mobile phones, the International Air Transport Association said.

"After checking their luggage in the city, travelers will have time and freedom to hang out with no burdens after they check out from hotels. Besides, they don't need to wait in lines at the airport," said Zhou Lin, senior business manager for passenger services at Travel-Sky Technology, a Beijing-based State-owned travel information provider.

"Off-airport bag drop needs to guarantee the isolation and safety of luggage transportation. There are many other things that need to be considered such as legal issues and authorizations if the services are to be launched in Beijing," he said.

"To make it a sustainable commercial service that can keep producing value, multiple issues need to be considered. For instance, passengers can sign an authorized document with the carrier and courier service company to enable them to track the status of their baggage and guarantee its safety," Zhou said.

Hong Kong International Airport, one of the busiest airports globally, has been offering remote check-in services at multiple locations for a decade, such as at Kowloon and Hong Kong metro concourses.

Passengers can check their luggage as early as 24 hours ahead of the time a flight takes off. If passengers bought tickets of metro express to the airport, the services of off-airport checking and bag drop would be free.

Besides, terminal one of Hong Kong airport plans to add more than 40 self-service baggage-checking machines this year.

"We will launch new equipment to cope with the growing capacity and passenger flows. We will build more seats and shops at the arrival areas and make it more convenient for those who come to pick up travelers. It's critical to keep up with the developing technologies and introduce new facilities to provide more convenient experiences for passengers," said Fred Lam, chief executive of the Airport Authority Hong Kong.

Lily Du, a 29-year-old bank employee in Beijing, said she dropped her luggage at Kowloon station in Hong Kong before her flight home when she traveled to the city earlier this year.

"It's really convenient as it allowed me to spend more time shopping and walking around in the city. If the new airport in Beijing offered such options, I would love to try that. It would definitely make life easier," she said.

At the same time, baggage-checking tags are expected to become smarter, and battery free electronic baggage tags are likely to replace traditional paper tags. Such e-tags are not in use in China yet, but have been put into use in some countries. Lufthansa, British Airways and all major US carriers have started trying out e-tags.

Every year, about 250 million baggage-checking tags are produced in China, which requires a huge amount of special printers and disposable materials, costing over 100 million yuan ($14.5 million) annually.

Shanghai-based Rinlink, a smart technology firm that was founded in 2017, is carrying out research and development of cyclic e-tags. The e-tags show images by reflecting natural light, and produce electricity by a near field communication sensor. Such battery-free tags are in compliance with the baggage check-in requirements of the Civil Aviation Administration of China.

A guide from IATA also said that the preferred solution for bag tag displays is electronic ink as it requires no power to maintain its content and only requires power when the content needs to be changed.

"The e-tags that we designed are water-proof, and the images can be saved permanently. If there is a need to look for any specific luggage, the e-tag responds by lighting up, as long as it is within two meters. What we are doing now is to make the e-tags work between different carriers," said Zhou Shaobin, CEO of Rinlink.

"In fact, such image display technology can be used on other occasions as well, like participant passes for events. It will help to save paper, as the e-tags last around three years," he said.