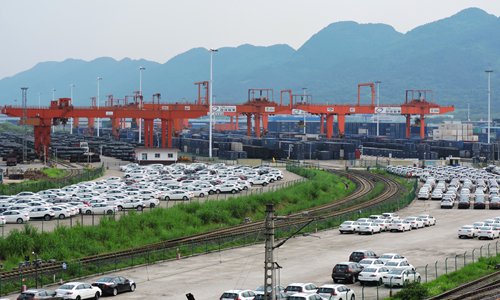 The negotiations on a China-EU bilateral investment treaty (BIT) are moving forward and the two sides have made positive headway in the text and an associated list, according to Chinese officials.

Analysts said there is a high possibility that the high-level agreement will be signed next year as scheduled amid the lingering China-US trade war and China's efforts to further open up its economy.

"China and EU representatives discussed the agreement text and list of the BIT and made positive progress" during the five-day, 21st round of China-EU BIT negotiations in Beijing that ended on June 14, Gao Feng, the spokesperson of China's Ministry of Commerce (MOFCOM), told the Global Times at a press briefing in Beijing on Thursday.

The two sides will adhere to the consensus reached by Chinese and EU leaders during the 21st China-EU leaders' meeting in April and achieve the target set by the leaders, Gao said.

China and the EU agreed in April that negotiations on the BIT should achieve "decisive progress" in the course of 2019 for the conclusion of a high-level agreement in 2020, according to a joint statement issued after the meeting. Talks on the BIT, which cover market access and investment protection, started in 2013.

Industry insiders said that MOFCOM's response sends a clear signal that both China and the EU attach great importance to BIT negotiations and are following the schedule strictly, indicating that an agreement is likely to be reached in 2020.

Wei Jianguo, a former vice commerce minister and vice secretary general at the Chinese Center for International Economic Exchanges, told the Global Times on Thursday that the smooth talks are "natural" as risks associated with investing in the US, which traditionally was the largest destination for the EU, are rising due to policy uncertainties under US President Donald Trump's administration.

"The EU also has large economic volume [which China needs]. The BIT talks are progressing just as a canal forms when water comes," Wei said.

In 2018, China's investment in the EU rose 3.3 percent year-on-year to $7.82 billion, making the country the bloc's eighth-largest source of investment, data from the MOFCOM showed.

Cui Hongjian, director of EU Studies at the China Institute of International Studies, told the Global Times that the acceleration of BIT talks showed that the EU is willing to work with China "independently" to jointly cope with the US-led anti-globalization trend.

Amid an escalation of China-US trade tensions, some have doubted that whether China was yielding to US pressure and being forced to open up. Industry observers said that the China-EU BIT refutes such talk, as it shows that China's willingness to open up is based on its own pace rather than a response to US threats.

Steps taken by the Chinese government last year have laid a foundation for China-EU BIT talks and made the country more appealing to foreign investors, analysts said.

China passed a new foreign investment law in March 2018 that ensures fair treatment to both domestic and foreign companies. A revised negative list is expected to be released by the end of June, Gao said.

Bai Ming, a deputy director of MOFCOM's International Market Research Institute, told the Global Times on Thursday that a BIT between China and the EU could attract more foreign investment into the market, which is crucial to the further opening up of the Chinese economy, especially amid strained ties with the US.

A successful BIT with the EU will also give China more bargaining chips at other negotiating tables, such as with the US.

"As long as we have an effective mechanism to attract foreign investors and push forward BIT talks, it does not matter if US companies follow President Donald Trump's order and cut ties with the Chinese market," Bai noted.

Some analysts pointed out that the standard for 5G market access of Chinese telecom equipment makers in EU countries may be an area of disagreement that slows the process of BIT talks. The EU has not adopted a unified stance on Huawei. While Spain has rolled out its 5G network using Huawei equipment, Czech and Poland have reportedly taken hostile attitudes.