Chinese and EU officials on Tuesday called for strengthened bilateral economic and trade ties and close cooperation to protect the global multilateral trade mechanism amid rising trade protectionism, but the two sides still have deep differences over various issues. 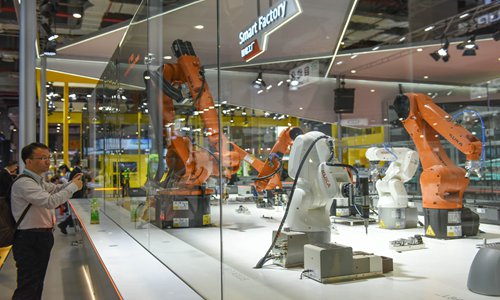 A view of KUKA's smart products during the China International Import Expo on November 5  (Photo:IC)

China and the EU have common interests in supporting economic globalization, but to be able to take joint measures the EU must first correct its misunderstanding of Chinese economic policies, Chinese analysts said on Wednesday."China and Europe, as staunch supporters of the rules of free trade and the multilateral system, share enormous common interests. We have to make concerted efforts to deepen our cooperation," Chinese Vice Premier Liu He told a China-Europe Summit in the German port city of Hamburg on Tuesday.In his speech at the summit, former German chancellor Gerhard Schroder also called for joint efforts to combat rising threats against the global free trade system."In today's world, there is no country that can master all these new challenges alone. The tasks we are facing require a strong and effective multilateral system," said Schroder, who is an honorary chairman of the Hamburg Summit.Chinese and EU officials have long discussed ways to preserve the WTO-based global free trade system through a series of dialogues, but the two sides have stalled before agreeing on any concrete joint efforts.Demand for respect"It is a very bumpy road and it is unlikely the two sides will reach any agreement in the short term," Wang Jun, deputy director of the Department of Information at the China Center for International Economic Exchanges, told the Global Times on Wednesday, adding that in terms of progress from here the ball is in the EU's court."The EU must respect China's path of economic development, even though it is vastly different from its own system, and it must recognize China's achievements in economic reform and opening-up over the past 40 years," Wang said. The EU should also drop its unfair treatment of Chinese investment, he noted.Amid increasing Chinese investment in the continent, the EU and some of its members such as Germany have moved to put stricter regulations in place to keep Chinese investment out of certain sectors."We have embarked on different paths and each follows a system that suits our respective conditions… countries must come to terms and respect their differences, and do everything they can to prevent such differences from turning into a source of ideological confrontation," Liu said in his speech.Dialogue must continue between China and the EU in order to find common ground and solutions to preserve the global free trade system, according to Bai Ming, a research fellow at the Chinese Academy of International Trade and Economic Cooperation."It is of paramount importance that the two sides keep talking in face of the rise of global trade protectionism," Bai told the Global Times, adding that there is still hope for joint efforts. "The further the US continues on its path of trade protectionism, the closer China and the EU will become," he said.